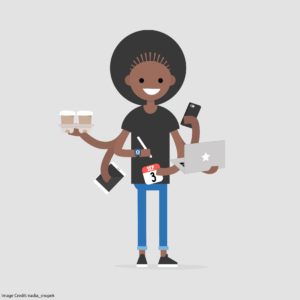 To many teachers, it just seems obvious: all that screen times MUST be bad for student brains.

To many other teachers, it just seems obvious: technology will unleash academic possibilities and revolutionize education.

So, which is it? Does media multitasking damage students’ cognitive capabilities? Or, does it allow them new avenues to creative possibilities?

Here’s What We Know

In a recent analysis, Uncapher and Wagner surveyed research into this topic.

Sure enough, they found some troubling evidence.

In half of the studies they examined, people who often use multiple streams of technology scored lower on working memory tests than those who don’t.

In two studies, they had a harder time recalling information from long-term memory.

Here’s a place where media multitasking might help: task switching. Given all the practice that multitaskers get diverting attention from one gizmo to another, they might well get better at doing so.

Alas, most of the research that U&W examined didn’t support that hypothesis.

Here’s What We Don’t Know: A LOT

Although all of the sentences above are true, they don’t answer most questions with any certainty.

(It’s important to note that NONE of the studies showed that high multitaskers were better at working memory tasks than their counterparts.)

Uncapher and Wagner repeatedly emphasize this point. We don’t have lots of studies — and those we do have don’t all point the same direction.

Overall, the evidence suggests heavy media multitasking might cause (or might result from) relative weaknesses in several cognitive functions.

We certainly don’t have evidence that encourages us to promote multi-gizmo use.

I myself try to stick to one device at a time. Until more evidence comes in, I’ll gently suggest my students do likewise.

NEXT
Evaluating the Best Classroom Practices for Teachi...