Cell Phones in the Classroom: Expected (and Unexpected) Effects 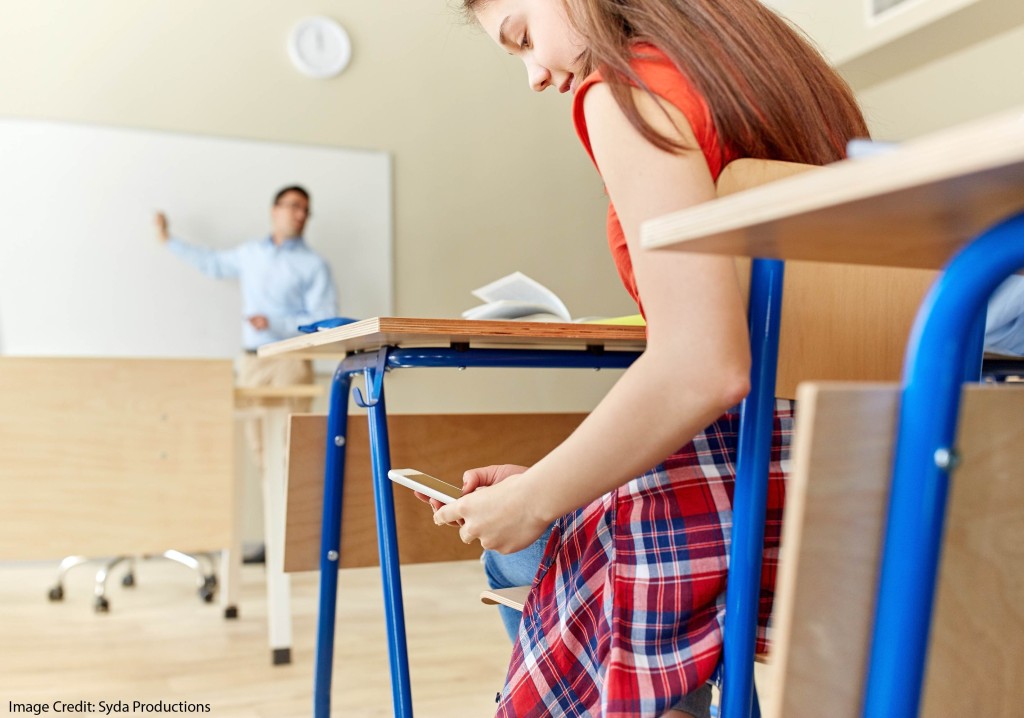 Researchers have recently found some predictable answers to that question–as well as some rather surprising ones. And, their answers may help us think about cell phones in classrooms.

Adrian Ward and Co. wanted to learn more about the “mere presence” of students’ cellphones.

Instead, they were asking if your phone lying silently on the desk in front of you distracts you–even if its not ringing or buzzing.

Even if you’re NOT CONSCIOUSLY THINKING ABOUT IT.

So they gathered several hundred college students and had them complete tests that measure various cognitive functions.

The first group of students left all their stuff–including phones–in another room. (That’s standard procedure during such research.)

The second group brought their phones with them “for use later in the study.” After silencing the phones (no ringing, no buzzing), they were told to put them wherever they usually keep them. Roughly half kept them in a pocket; the other half kept them in a nearby bag.

The third group brought phones along, and were instructed to put them in a marked place on the desk in front of them. (These phones were also silenced.)

Did the proximity of the phone matter?

As is so often true, the answer to that question depends on the measurement we use.

When the researchers measured the students’ working memory capacity, they found that a cell phone on the desk reduced this essential cognitive function.

Specifically, students who left phones in their bags in another room averaged about a 33 on an OSpan test. (It measures working memory–the specifics aren’t important here.) Those who had cell phones on their desks scored roughly 28.5. (For the stats pros here, the p value was .007.)

If you attend Learning and the Brain conferences, or read this blog regularly, you know that working memory is ESSENTIAL for academic learning. It allows us to hold on to bits of information and recombine them into new patterns; of course, that’s what learning is.

So, if the “mere presence” of a cell phone is reducing working memory, it’s doing real harm to our students.

So, our students might TELL US that their phones don’t interfere with their cognition. They might not even be conscious of this effect. But, that interference is happening all the same.

Few teachers, I imagine, are surprised to learn that a nearby cell phone makes it hard to think.

What effect does that phone have on the ability to pay attention?

To answer this question, researchers used a “go/no-go” test. Students watched a computer screen that flashed numbers on it. Whenever they saw a 6, they pressed the letter J on the keyboard. They ignored all the other numbers.

(The researchers didn’t go into specifics here, so I’ve described a typical kind of “go/no-go” task. Their version might have been a bit different.)

To do well on this task, you have to focus carefully: that is, you have to pay attention. Researchers can tell how good you are at paying attention by measuring the number of mistakes you make, and your reaction time. Presumably, the slower you are to react, the less attention you’re paying.

Or, to be precise, the students who had the phone on the desk reacted in 0.366 seconds, whereas those whose phones were elsewhere reacted in 0.363 seconds. As you can imagine, a difference of 0.003 seconds just isn’t enough to worry about. (Stats team: the p value was >.35.)

Ward’s results here are, I think, quite counter-intuitive. We would expect that the mere presence of the phone would interfere with working memory because it distracted the students: that is, because it interfered with their attention.

The explanation can get technical quickly. Two key insights help understand these results.

Key Insight #1: Attention isn’t just one thing. It has different parts to it.

One part of my attentional system brings information into my brain. I am, at this moment, focusing on my computer screen, Ward’s article, my keyboard, and my own thoughts. Sensory information from these parts of my world are entering my conscious mind.

Another part of my attentional system screens information out of my brain.  I am, at this moment, trying not to notice the bubble-and-hum of my cats’ water gizmo, or my cat’s adorable grooming (why is his leg stuck up in the air like that?)–or, really, anything about my cats. Sensory information from those parts of my world are not (I hope) entering my conscious thought.

In other words, we use working memory to keep out adorable cat behavior–and other things we don’t want to distract our conscious minds. Other things such as–for example–cell phones.

The nearby phone doesn’t interfere with the first part of attention, and so the correct information gets into student brains. For this reason, students do just fine on Ward’s “attention” test.

However, the nearby phone does make it hard to filter information out. It’s bothering the second part of attention–which is a part of working memory. For this reason, students do badly on Ward’s “working memory” test.

Ward’s research, I think, gives us some clear pointers about cell phones in classrooms: the farther away the better.

Specifically, it contradicts some teaching advice I’d gotten a few years ago. Some have advised me that students should silence their phones and put them on the desk in front of them. The goal of this strategy: teachers can be sure that students aren’t subtly checking their phones under their desks.

While, clearly, it’s beneficial to silence phones, we now know that their “mere presence” on the desk interferes with working memory.

In brief, we need another solution.

(Sadly, Ward doesn’t tell us what that solution is. But she warns us away from this phone-on-the-desk strategy.)

Implications for Brain Science in the Classroom

Teachers LOVE learning about psychology and neuroscience research because it can offer such helpful and clarifying guidance for good teaching.

(I should know: I’ve spent the last ten years using such research to be a better teacher.)

At the same time, we teachers occasionally stumble into studies like this one where psychology gives us results that seem strange–even impossible.

The answer–as described above–is that psychologists think of attention as having multiple parts, and one of those parts overlaps with working memory. Because psychologists define the word “attention” one way and we teachers use it a different way, research like this is potentially very puzzling.

(You can imagine our students reading this study and crowing: “See! Cell phones have NO EFFECT on attention! “)

For this reason, we need to be especially careful when we enter into the world of brain science. Definitions of basic words (“attention,” “transfer,” “significant”) might trip us up.

And so, you’re wise to be attending Learning and the Brain conferences, and to be consulting with experts who know how to read such studies and make sense of them.

In brief: teachers should be modest when we try to interpret primary research in neuroscience and psychology. These fields are so complicated that we just might misunderstand even basic terms.

By the way, the same point holds in reverse. Neuroscientists and psychologists should be modest when telling us how to teach. Our work is so complicated that they just might misunderstand even basic classroom work.

This mutual modesty is–I believe–the basis of our field. We all come together to learn from and collaborate with each other. Our students will benefit from this complex and essential collaboration.

2 Responses to Cell Phones in the Classroom: Expected (and Unexpected) Effects

PREVIOUS
Emotional Intelligence: Teachers’ Perspectiv...
NEXT
The Battle of the Sexes, in Headlines