“Wait Just a Minute!”: The Benefits of Procrastination?

“A year from now, you’ll wish you had started today.” 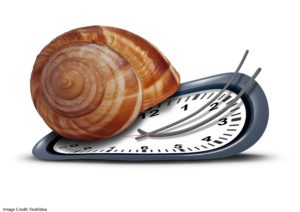 This quotation, attributed to Karen Lamb, warns us about the dangers of procrastination. Presumably our students would propose a slightly modified version:

“The night before the test, I’ll wish I had started studying today.”

I myself was intrigued when recently asked this question.

(True story: I was the President-To-Be of the Procrastinators’ Society in my high school. I would surely have been elected, but we never scheduled the meeting.)

Sure enough, researchers have theorized that we procrastinate for different reasons and in different ways.

Many of us, of course, procrastinate because we can’t get ourselves organized to face the task ahead.

(Mark Twain assures us he never put off until tomorrow that which he could do the day after tomorrow.)

Danya Corkin and colleagues wondered about another kind of deliberate procrastination: something they call “active delay.”

Third — unlike most procrastinators — they get the work done on time.

Fourth, they feel good about the whole process.

What did Corkin & Co. find when they looked for these distinct groups?

The Benefits of “Active Delay”

As is often the case, they found a mixed bag of results.

This research gives teachers a few points to consider.

First: both kinds of procrastination might look alike to us. However, they might lead to quite different results.

Even if students procrastinate from our perspective, we can distinguish between two categories of procrastination. And, we should worry less about “active delay” than good, old-fashioned putting stuff off because I can’t deal with it.

Second: even though “active delay” leads to more learning than “procrastination,” both probably produce less learning than well-scheduled learning.

As we know from many researchers, spreading practice out over time (interleaving) yields more learning than bunching it all together.

Active delay might not be as bad, but it’s still bad for learning.

Finally: if you’re an “active delayer,” you might forgive yourself. As long as you’re choosing delay as a strategy — especially because you work best under pressure — then this flavor of procrastination needn’t bring on a bout of guilt.

Me: I’m going to watch some football…

NEXT
Let’s Have More Fun with the Correlation/Cau...