This Is Your Amygdala on a Cliff…

Without ropes. Without protective gear of any kind.

And without, it seems, a typically functioning amygdala.

At the time, Joseph studied high sensations seekers: people who are “drawn to intense experiences and are willing to take risks to have them.” That is, for example, people who habitually scale sheer walls of granite.

(Descriptions of Honnold’s visit appear in J. B. MacKinnon’s excellent essay: “The Strange Brain of the World’s Greatest Solo Climber.”)

The Case of the Quiet Amygdala

Using fMRI scanning, Joseph’s team examined Honnold’s brain. In particular, they focused on the reactivity of his amygdalae.

These  small, almond-shaped regions of the brain sit at the tip of the hippocampus. Their function, simply put: to process strong negative emotions, like fear.

(For scrupulous readers, “amygdala” is singular; “amygdalae” is plural.)

Jane Joseph — like many others — wanted to know: did Honnold’s amygdalae react differently than those of others?

To test the question, she showed him 200 pictures, many of them gruesome or disgusting: “corpses with their facial features bloodily reorganized; a toilet choked with feces.”

“On the hardest parts of some climbing routes, his fingers will have no more contact with the rock than most people have with the touchscreens of their phones, while his toes press down on edges as thin as sticks of gum.”

Honnold’s quiet amygdalae might explain his fearlessness. But, what explains his quiet amygdalae? How can you stand 2000 feet about the ground on a stick of gum without gut-tormenting terror? 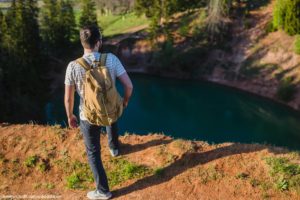 (If you’re like me, your palms start sweating when you see him standing there. Now, imaging being there…)

To be clear, we should note that Honnold does have amygdalae. The MRI scan shows them, looking perfectly normal.

(Very rarely, some people have deformed or absent amygdalae. They don’t typically grow up to be free soloists, but they do demonstrate much less fear than others.)

Two explanations might help us understand Honnold’s remarkable brain. [Edit: to be clear, both these explanations appear in MacKinnon’s article.]

In the first place, genetic variability creates a range for all human functions and characteristics. For example, men average a height of just under 5’10”. The tallest man, however, towers at 8’2″.

In this case, Honnold might have — by the luck of the genetic draw — extremely under-reactive amygdalae.

In the second place, he might also have developed techniques for re-evaluating scary/terrifying situations. By mentally “reviewing the tapes” of his climbs, by deliberately re-evaluating them calmly and rationally, he can desensitize himself to the fear that would grip practically anyone else.

In other words: a combination of nature (genetics) and nurture (deliberate re-evaluation) might tame Honnold’s amygdalae, and allow him to face extra-ordinary terrors with extra-ordinary calm.

In just the right conditions, our brains can help our bodies do almost anything. Like: scaling a cliff with preternatural sang-froid.

To hear Honnold talk about his experience of fear, click here.

For other strategies to calm the amygdala, click here.

To learn A LOT more about emotions and fear, read Joseph LeDoux’s The Emotional Brain: The Mysterious Underpinnings of Emotional Life. Also, Behave by Robert Sapolsky.

PREVIOUS
Ask a Simple Question, Get an Oversimplified Answe...

NEXT
The Limits of Retrieval Practice, Take II…