The Most Important 5 Minutes in Class: The Primacy/Recency Effect

As we put our lesson plans together, we teachers want to know: are some minutes more valuable than others? 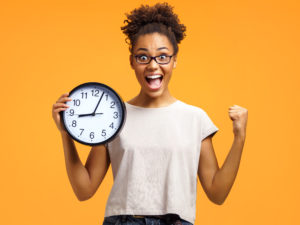 Do students remember most at the 10-minute mark of the lesson, because they’re mentally revved up?

Or, perhaps they remember most from the final five minutes, because the whole class has led to this grand conclusion.

Or, perhaps some other time slot generates the most learning, because psychology reasons.

What does the research tell us?

I occasionally see teaching advice that seeks to answer this question. That advice typically begins with a fascinating research pool.

Researchers present students with — say — a list of 15 words. After distraction, how many  words do students remember? And, can we predict which ones?

Students tend to remember words from the beginning of the list. Researchers call that the “primacy” effect.

And, they remember words from the end of the list. That result gets the moniker “recency effect.”

Going all the way back to 1962, this primacy/recency effect has a lot of research behind it. (For a more recent study, click here.)

So, how should teachers plan our lessons based on this particular finding?

Let’s imagine that I tell my students a list of 8 instructions. Because of the primacy/recency effect, I suspect they’ll remember the early and late instructionst better than the ones in the middle. (Hint: maybe I should write down a long list of instructions…)

But: what does this effect tell us about the most valuable teaching time during a class period as a whole?

From time to time, scholars who translate psychology research for classroom teachers make this argument:

Voila: a research-based answer to the question.

I confess, however, that I myself have doubts.

The argument says, in effect:

Honestly, I’m just not sure that’s plausible. My doubts spring from two sources.

In the first place, I doubt this advice because it extrapolates so far beyond the initial research conditions.

If research tells me something about adolescents in Iceland, that conclusion might apply to teens in Brazil. But it might not. Icelandic culture differs from Brazilian culture.

And, if research tells me about mental functions over one minute, that conclusion might apply to 20 minutes. (Or 45, or 80.) But IT MIGHT NOT. One minute isn’t twenty.

Long-time readers know I always focus on “boundary conditions.” From my perspective, this advice goes WAY beyond the boundaries of the initial research.

By the way: I’ve asked SEVERAL wise people if they know of primacy/recency research that goes beyond a minute or two. So far, the answer is “no.”

The second reason I doubt this advice because of the specific mental functions involved.

As far as I can tell, researchers explain the primacy/recency effect by talking about short-term memory and working memory.

Both of these mental faculties describe very short-term mental functions. In my grad-school classes, our profs typically said that working memory holds information somewhere between 5 and 30 seconds.

If, in fact, the primacy/recency effect results from short-term and working memory functions, then those findings almost certainly won’t apply to mental processes that take 30+ minutes.

If this advice doesn’t hold, what can research tell us about the “most important five minutes in class”?

I’ve asked lots of people if they have a resaerch-informed answer to this question. So far, no one has a strong “yes.” But, If I hear of one, I’ll pass it along.

And, btw, a friend has answered “we really have to research that question!” So, I’ll let you know if/when his results come through.

Long-time readers know my mantra: “don’t just do this thing; instead, think this way.”

In this case, I don’t think we can plausibly identify any one time slot that consistently generates the most learning.

Instead, we want to use core ideas from cognitive science to structure lesson plans effectively.

If we follow this approach, every minute will build ultimately — and more-or-less equally — toward students’ learning.

Castel, A. D. (2008). Metacognition and learning about primacy and recency effects in free recall: The utilization of intrinsic and extrinsic cues when making judgments of learning. Memory & Cognition, 36(2), 429-437.

NEXT
ADHD and Asperger Syndrome in Smart Kids and Adult...