Teens and Cell Phones: The Good, The Bad, The (Not So) Ugly 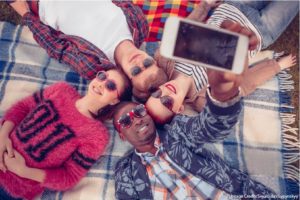 A recent article in Nature magazine wisely captures the complexities of the Great Cell Phone Debate.

Will they transform human potential?

Will they destroy our children’s self-confidence, not to mention their ability to hold a simple conversation? Their ability to pay attention in class?

(For earlier articles on these topics, see here and here.)

“In general, the adolescents who encounter more adversity in their offline lives seem most likely to experience the negative effects of using smartphones and other digital devices.”

That is, the cell phone isn’t causing the problems. For children who already struggle, however, it might exacerbate existing problems.

Teens and Cell Phones: The Good

You might be surprised to read Odgers’s list of digital benefits. Several studies show that teen texting can foster healthy relationships.

6-12 year-olds with solid social relationships are likelier to keep in digital communication with peers as they get older.

Virtual conversations can even help teens “bounce back after social rejection.”

Clearly, cell phones aren’t destroying our children’s ability to create healthy relationships. (Of course, the form those relationships take looks quite different from those of our youths. Or, at least, my youth.)

Teens and Cell Phones: The Bad

As Odgers sees the research, socio-economic status might be a key variable.

“What we’re seeing now is a new kind of digital divide, in which differences in online experiences are amplifying risks among already-vulnerable populations.”

So: for low-income families, online fights lead to real world fights more often. So too bullying.

Complaints about teens and cell phones often miss a crucial point: they get those cell phones from us.

Odgers’s own research shows that 48% of 11-year-olds in North Carolina have cell phones. I’m guessing that relatively few of those 11-year-olds bought those phones — and the data plans — with their own money.

Also: adolescents did not invent the cell phone. They aren’t running companies that make huge profits from their sale.

We are, after all, the ones who make their digital lives possible.

NEXT
Uniquely Human: How Animals Differ From People