Military Parents Serving Overseas: What Happens To The Children? 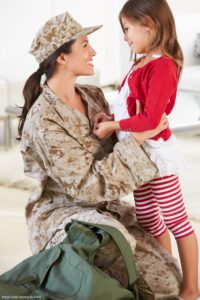 We got a Twitter question earlier this week about the educational experience of military children. A quick review of the research suggests we can start to answer this question: does military deployment hinder learning for those children?

The most comprehensive study I found looks at data for over 56,000 (!) children. Researchers Engel, Gallagher, and Lyle wanted to know: when a parent goes away on deployment, what happens to their child’s academic performance?

The researchers also hypothesize that deployment might improve academic performance. The child, they reason, might develop a greater sense of responsibility when one parent is away. Or, perhaps, the extra household income that comes from “hostile fire pay” might benefit learning.

Engel, Gallagher, and Lyle found that a parent’s absence because of deployment does affect their children’s learning.

Specifically, deployment itself brings down standardized test scores 0.42%; each additional month prompts and additional 0.11% reduction. The averages are slightly higher in math and science, and lower in reading in social sciences and reading.

Importantly, these effects last. Engel & Co. found that these children were still slightly behind their peers four years later. By the fifth year, however, they had — on average — fully caught up.

The researchers got data only for those children who attend on-base schools. Engel & Co. argue that schools run by the military are better equipped to help these students than other school systems, and so the gaps may be even greater for children in school off base.

These data, by the way, come only from army bases. There’s no obvious reason that the numbers would be different for other branches of the military.

What to make of these numbers?

On the one hand, 0.11%/month hardly seems like much. That’s one tenth of a percentage point — hardly enough to notice.

On the other hand, those numbers add up quickly. For a 12-month deployment — with the initial decrement of 0.42% — that adds up to almost two full percentage points. Knowing that students experience even greater difficulties in math and science, we can genuinely worry about their progress in these disciplines.

And, this pattern creates problems for lots of families. In 2007, 700,000 children saw a parent leave on military deployment.

When we’re talking about that number of children, we should be keenly interested in helping.

How We Can Help?

In the first place, it’s important for teachers to know about these data. When a student’s parent deploys, we should be on the lookout for some initial academic difficulties. And, we should know that they might well increase over time.

Math and science teachers in particular should keep this potential on their radar.

The best way to help, of course, will vary. Perhaps a teacher can provide extra support and understanding. Perhaps a school has programs that provide much-needed structure.

We should also note that these problems might linger. Few of us are surprised that a child whose parent is leaving experiences distress, or that this distress might lead to academic struggle.

At the same time, we should keep in mind that this research reports averages. Some students clearly struggle during this difficult time. However, not all of them do. Some might — as the researchers initially hypothesized — see a parent’s absence as a time to assume greater responsibility.

Clearly, student resilience is an important story in these data.

With this information in mind, teachers and schools can better serve the children whose parents are serving their country.

PREVIOUS
Beware: Too Much Structure Hinders Creativity (for...
NEXT
That Book You Were Just Reading…What Was It ...