“How We Learn”: Wise Teaching Guidance from a Really Brainy Guy

Imagine that you ask a neuro-expert: “What’s the most important brain information for teachers to know?”

The answer you get will depend on the expertise of the person you ask.

If you ask Stanislas Dehaene, well, you’ll get LOTS of answers — because he has so many areas of brain expertise.

He is, for example,  a professor of experimental cognitive psychology at the Collège de France; and Director of the NeuroSpin Center, where they’re building the largest MRI gizmo in the world. (Yup, you read that right. IN THE WORLD.)

He’s also President of a newly established council to ensure that teacher education in all of France has scientific backing: the Scientific Council for Education. (If the United States had such a committee, we could expunge Learning Styles myths from teacher training overnight.)

If that’s not enough, Dehaene is interested in artificial intelligence. And statistics. And evolution.

So, when he writes a book called How We Learn: Why Brains Learn Better than Any Machine…for Now, you know you’re going to get all sorts of wise advice.

Dehaene wants teachers to think about “four pillars” central to the learning process.

As you can see, this blueprint offers practical and flexible guidance for our work. If we know how to help students pay attention (#1), how to help them engage substantively with the ideas under discussion (#2), how to offer the right kind of feedback at the right time (#3), and how to shape practice that fosters consolidation (#4), we’ll have masterful classrooms indeed.

Learning, of course, begins with Attention: we can’t learn about things we don’t pay attention to. Following Michael Posner’s framework, Dehaene sees attention not as one cognitive process, but as a combination of three distinct cognitive processes.

Helpfully, he simplifies these processes into three intuitive steps. Students have to know:

when to pay attention

what to pay attention to, and

how to pay attention.

Once teachers start thinking about attention this way, we can see all sorts of new possibilities for our craft. Happily, he has suggestions.

This misunderstanding has led to many needlessly chaotic classroom strategies, all in the name of “active learning.” So, Dehaene’s emphasis here is particularly helpful and important.

What’s the best way to create cognitive (not physical) engagement?

“There is no single miraculous method, but rather a whole range of approaches that force students to think for themselves, such as: practical activities, discussions in which everyone takes part, small group work, or teachers who interrupt their class to ask a difficult questions.”

Error Feedback (pillar #3) and Consolidation (#4) both get equally measured and helpful chapters. As with the first two, Dehaene works to dispel myths that have muddled our approaches to teaching, and to offer practical suggestions to guide our classroom practice.

Underneath the “Four Pillars”

These four groups of suggestions all rest on a sophisticated understanding of what used to be called the “nature/nurture” debate.

To take but one example: research with babies makes it quite clear that brains are not “blank slates.” We come with pre-wired modules for processing language, numbers, faces, and all sorts of other things.

That is: the baby understands probability. They know it’s increasingly likely you’ll draw a red marble, and increasingly surprising that you don’t. Don’t believe me? Check out chapter 3: “Babies’ Invisible Knowledge.”

Of course, Dehaene has fascinating stories to tell about the brain’s plasticity as well. He describes several experiments — unknown to me — where traumatized rats were reconditioned to prefer the room where the traumatizing shock initially took place.

He also tells the amazing story of “neuronal recycling.” That is: the neural real-estate we train to read initially housed other (evolutionarily essential) cognitive functions.

Dehaene opens his book by contemplating definitions of learning — and by contrasting humans and machines in their ability to do so.

By one set of measures, computers have us beat.

For instance, one computer was programmed with the rules of the game Go, and then trained to play against itself. In three hours, it became better at the game than the human Go champion. And, it got better from there. 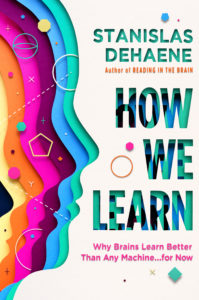 However, Dehaene still thinks humans are the better learners. Unlike humans, machines can’t generalize their learning. In other words: that Go computer can’t play any other games. In fact, if you changed the size of the Go board even slightly, it would be utterly stumped.

And, unlike humans, it can’t explain its learning to anyone else.

And, humans need relatively little data to start learning. Machines do better than us when they can crank millions of calculations. But, when they calculate as slowly as we do, they don’t learn nearly as much as we do.

As his subtitle reassures us, brains learn better than any machine. (And, based on my conversation with him, it’s clear that “…for now” means “for the long foreseeable future.”)

You might, however, wonder if this much technical information ends up being a little dry.

The answer is: absolutely not.

Dehaene’s fascination with all things brain is indeed palpable in this book. And, his library of amazing studies and compelling anecdotes keeps the book fresh and easy-to-read. I simply lost track of the number of times I wrote “WOW” in the margin.

This has been a great year for brain books. Whether you’re new to the field, or looking to deepen your understanding, I recommend How We Learn enthusiastically.

3 Responses to “How We Learn”: Wise Teaching Guidance from a Really Brainy Guy

PREVIOUS
Whose Online Teaching Advice Do You Trust?