Battles Worth Fighting: “What the Academy Taught Us”

Eric Kalenze’s What the Academy Taught Us begins with a fistfight.

More specifically, it begins with a fight among several students — some of whom belonged to Kalenze’s academic program. 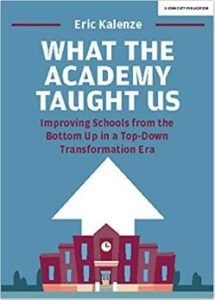 As it turns out — I won’t give away the surprise here — this fight was (sort of) a good thing. And in this way, it sets the tone for Kalenze’s book. He believes, quite palpably, that the right kind of education is worth fighting for.

Even better, he has thoughtful suggestions for the best way to take on those battles.

Kalenze’s story begins with his principal, Dr. Bob: the hero of this tale. After a deep data dive, Dr. Bob concluded that his school’s graduation woes could be tracked back to the sophomore year.

Students who had gotten behind in credits by the end of that year lacked the time (and academic gusto) to catch up.

For that reason, Dr. Bob asked a group of teachers (including Kalenze) to form a school-within-a-school: the “Sophomore Academy.” The Academy would concentrate on struggling students, and get them on a path to graduation.

Crucially, it would accomplish this task within two key boundaries:

First, it didn’t have an additional budget. It needed to function with the same number of dollars that the school currently had.

Second, it couldn’t lower the standards for the students in the academy. Those students had to meet the same requirements that the school’s other students did.

In other words: teachers in the Sophomore Academy faced steep challenges as they set about designing this new academic program.

Having identified the key problem and established these parameters, Dr. Bob then gave great leeway — and even greater support — to his hand-picked crew of five teachers.

Working together over hours and weeks and years, this team built a rigorous and supportive program to help their students become both “stable and able.”

That is: they developed the habits of work and thought required for academic success (“stable”). And, with those habits better settled, they made real progress in their own academic accomplishments (“able”).

Along the way, Kalenze and colleagues faced a great many challenges: resistance from students, from non-Academy colleagues, from each other — and ultimately from their school district.

And while that resistance didn’t lead to fistfights, it did require thoughtful strategizing for Kalenze, his colleagues, and Dr. Bob.

In writing What the Academy Taught Us, Kalenze doesn’t try to persuade us to create Sophomore Academies in our own schools.

In fact, he’s quite confident that the model he helped devise wouldn’t be especially useful elsewhere.

Why? Because such changes should respond to specific, local needs. They should NOT follow an abstract, Platonically-Ideal Model For All Schools.

Instead — crucially — Kalenze has advice on managing the complex process of creating change in school systems: systems not famously open to change.

In offering his advice, Kalenze states quite frankly that he has no revolutionary proposals or cute acronyms. Instead, he has practical examples to show how and why he advises as he does.

For instance: when he encourages schools to rethink professional development systems, he offers his own school’s efforts as both good and bad examples. (The bad examples come especially when the local district takes over to insist that all schools do the same thing.)

Why This Book on This Blog?

You have probably noticed by now that What the Academy Taught Us doesn’t have much to say about brain research.

So: why am I reviewing it, and encouraging you to read it?

Here’s why: my goal when I started attending Learning and the Brain conferences was to improve my own teaching. I believed (and believe) that if I learn more about brains and minds, I’ll get better at helping other people learn almost anything else.

Perhaps that’s your goal as well: bettering yourself as a teacher.

At the same time, you might have a grander goal: improving school-wide practice. You want your own teaching to be better, sure. But, you want your colleagues‘ teaching and your administrators’ guidance and your students’ self-knowledge to improve as well.

In that case, you need not only to learn more about psychology and neuroscience, but also to learn how to create change in your teaching world.

I blog from experience when I say: that’s really hard to accomplish.

I’m recommending Kalenze’s book not because of its brain research (it doesn’t include any) or because I think you too should start a Sophomore Academy (and neither does Kalenze).

Instead, I think he has sensible, practical advice about creating school climates where meaningful change just might happen.

And that is, indeed, a battle worth fighting.

PREVIOUS
How to Find Happiness