The Brain: The Story of You by David Eagleman 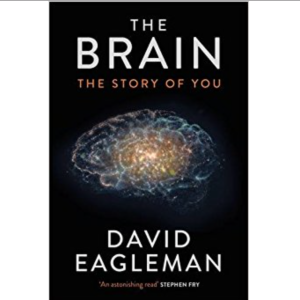 As an easy-to-read and engaging textbook or as a scientifically accurate and detailed popular psychology book, David Eagleman’s The Brain: The Story of You is an ideal book for people seeking to teach themselves an introduction to cognitive neuroscience and psychology. Eagleman, a neuroscientist, New York Times best-selling author and an adjunct professor at Stanford, frames each chapter of the book with lofty, existential questions such as “Who am I?” and “Who will we be?” In this book, Eagleman reviews how the human brain develops, how our senses and ability to perceive the world develop, how external factors influence our actions and decision-making, why we are such social creatures, and how technology might augment and extend our lives.

The human brain undergoes substantial development throughout our lives, particularly from birth through adolescence. Indeed, it must undergo more development after birth than does the brain of nearly any other species. Our brains are shaped substantially by the context in which they develop. They need all kinds of stimulation and social support to develop optimally. We are very social creatures. For example, we see social relationships even in inanimate objects; babies can demonstrate a preference for characters who are nice as compared to ones who are mean; and we act like the people around us.

As an incredibly calorically expensive organ, we depend on our brains for a lot of what we do. For example, while we colloquially say that we see through our eyes and smell through our noses, really we perceive the world through our brains’ interpretation of the information received through other organs. This interpretation means that we are not necessarily experiencing an objective relative. Rather, we experience what we expect to sense. Eagleman explains how our brain supports us in experiencing each of our senses. Even seemingly simple and mundane tasks such as walking or sipping a beverage requires a significant amount of coordination across our senses, which our brain orchestrates.

Eagleman explores how we make decisions and how we choose to act. He argues that there are numerous unconscious influences on our actions. While our brains lead us to believe that we consciously make choices, evidence from many sources suggests that we often choose unconsciously, and only generate a justification consciously. Physiological signals can also influence our actions and steer our decision-making. Brain systems compete for the ability to guide our actions and decisions. This has been demonstrated with patients who have had the two hemispheres of their brains severed from one another. In these people we see one hemisphere will lead the person to perform an action that contradicts the action the other hemisphere wishes to perform. Deeply troubled by humans’ evil actions against others, Eagleman reviews work about how on micro and macro scales we decide to mistreat others. He argues ceasing to see others as people (i.e., dehumanizing them) and instead seeing them as objects is a primary mechanism by which we choose to mistreat others.

Our brains are driven both to seek rewards and to plan for the future. People often establish a contract between their current self and their future self to help resist present temptations and increase the likelihood of performing adaptive behaviors for the future. For example, as someone tries to quit smoking, she might give a friend a large check made out to an organization she despises and tell the friend to mail the check if she smokes again. Eagleman reviewed work that he has led in which he attempts to use neurofeedback (i.e., providing people with information about the relative activity of a part of the brain that is involved in seeking rewards versus a part involved in thinking about the more distant future) to help people addicted to drugs regulate their cravings, thereby resisting current rewards to live a healthier life.

Eagleman concludes with a fascinating exploration of the way in which we might use technology to enhance our bodies and lengthen our lives. While it may not be apparent to us, we have already begun to use technology to enhance what our bodies can do. For example, cochlear implants, which provide those who are deaf with a sense of hearing, are a way in which we have shown that our brains and technology can work together. While the human brain cannot be explained entirely by a computer model, Eagleman explores how human-like robots, brain simulations, and attempts to “upload” our brains may all contribute to an understanding of the brain, and of how we can use technology to preserve ourselves for a long time.

The Brain: The Story of You will be of great interest for those seeking to understanding the human brain and how it makes us who we are.

PREVIOUS
School, Self-Regulation, and the Brain

NEXT
The Potential Benefits of High School Music Classe...