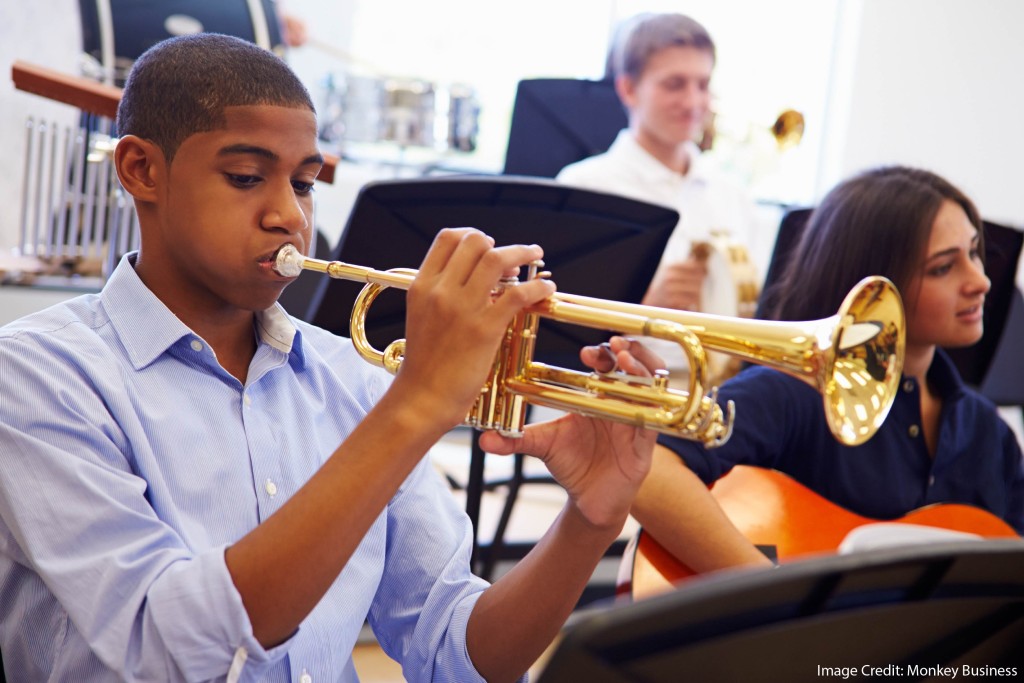 Should 9th graders start music classes–even if they’ve never played an instrument before? Are there academic benefits to studying music? Is 9th grade too late a start to get those benefits? Should my school’s STEM program become a STEAM program?

A recent study by Adam T. Tierney offers some answers to these compelling questions.

Tierney & Co. followed 19 high school students who enrolled in a high school music ensemble, and compared them to 21 students at the same school who started a JROTC program.

These groups started off nicely matched in various academic and linguistic measures. However, at the end of 4 years, the group that had studied music improved in some suggestive ways.

First, the neural signatures of their response to speech changed meaningfully; oversimplifying a bit here, they were “more mature.”

Second, the musicians improved more than the JROTC participants in their ability to distinguish between and manipulate language sounds.

Reasons to be Excited

Tierney’s study gives us several reasons to perk right up.

For example: we’ve known for a long time that life-long musicians have these language processing benefits. Now we have good reason to think that even those who pick up an instrument later in life get them as well.

Another example: this study compares the musicians to the JROTC participants. That is, it does not compare them just to some random collection of non-musicians. Like these new musicians, the JROTC students had a highly disciplined practice schedule, had to function in a structured group, and so forth.

Because the study includes this “active control group,” we can be sure the results don’t come from–say–just being part of an organized school activity.

Most exciting: the students’ improvement in their ability to process language sounds.

This ability–called “phonemic awareness”–gets a lot of research attention, because it can predict success in several essential language skills: reading and writing, to name two.

We test phonemic awareness in many ways. For instance:

If music practice–even music practice begun in high school–can improve students’ phonemic awareness, it just might be able to help them do well in other courses where they have to process language–which is to say: all of them.

Tierney’s study is exciting, but we shouldn’t require all of our students to join band just yet. Here are a few important gaps in this research:

The students enrolled in music class improved their phonemic awareness, but Tierney didn’t measure if that improvement had any impact on, say, their performance in English class; or, perhaps, their ability to learn a new language. That effect is plausible, but not demonstrated here.

Also, Tierney & Co. measured two other linguistic abilities beyond phonemic awareness: phonological memory, and rapid naming. They found no statistically significant difference between the music students and the JROTC students in these two measures.

If one measure out of three shows improvement, that’s good. But it’s not a home run.

And, a point about the research methodology here. These students chose to join band or JROTC; they were not–in the “gold standard” of research–randomly assigned to do so. (Of course: there are many good reasons to let students choose, rather than forcing them into one group or another.)

In other words: perhaps those band students were always a little better at discriminating among sounds, which is why they were drawn to music in the first place. Tierney’s team did try to rule that out with their various pre-study measures, but perhaps those differences are not captured by the tests we have.

We just don’t know. (Or, better said: we don’t “know” in the way that scientists want to know things.)

I understand why people are attracted to this argument: “students should do art because it makes them better at other things we do in school.”

I am more attracted to this argument: “students should make art because it’s an essential expression of human joy, sorrow, love, solitude, fun, reverence, and hope.”

One Response to The Potential Benefits of High School Music Classes

PREVIOUS
The Brain: The Story of You by David Eagleman