Moral Tribes: Emotion, Reason, and the Gap Between Us and Them by Joshua Greene 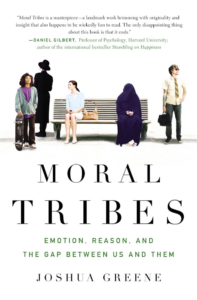 “We should simply try to make the world as happy as possible” (P.333). That this principle might serve as a universal moral philosophy is one of the central claims in Joshua Greene’s book, Moral Tribes: Emotion, Reason, and the Gap Between Us and Them. Greene, professor of psychology and director of the moral cognition lab at Harvard University, explains what morality is, why we develop it, how our brains support our moral decision making, why we sometimes fail to optimize universal happiness, and how a deeply pragmatic, universally-acceptable moral philosophy might help us achieve peace and flourish. Specifically, Greene argues that we developed morality because it promotes cooperation within a group—it allows people to favor “Us” over “Me.” Because we are more connected than ever before, many of today’s social problems arise because of a tension between moral tribes, or a tension between “Us” and “Them.” While the brain’s automatic moral reasoning makes us very efficient at solving “Us versus Me” problems, we must rely upon our more effortful and inefficient moral manual mode to address problems of “Us versus Them.” Utilitarianism, a moral philosophy that suggests that our actions should be guided by the pursuit of the best outcomes for all involved in a situation, may be our optimal moral guide.

Greene distinguishes two types of moral dilemmas. The first is the well-known “tragedy of the commons” in which, if each individual pursues his own best interest (e.g., acquires more cattle to graze on the commons), doing so will undermine the collective good (e.g., the commons will be over-grazed). Cooperation within a group helps us avoid this problem and supports our group’s survival. We evolved a moral compass because it helps us cooperate. The second moral dilemma is the “tragedy of commonsense morality” in which the morality one tribe has developed to deal with the “tragedy of the commons” conflicts with the moral common sense of another tribe.

Greene explains research his and other research teams have conducted about the factors that shape moral decision-making and the brain systems that support it. The research uses variants of the following hypothetical scenario: five people are facing an impending death and an action the research participant takes could save the lives of those five people while costing one person to lose her life. All else being equal sacrificing one life to save five is desirable. Under certain conditions, however (e.g., if one must actively inflict force), people do not report that they would save the five lives.

Different regions within our prefrontal cortex (PFC) (i.e., the ventromedial and the dorsolateral PFC) are especially active when reasoning about different scenarios and the PFC is involved in planning the actions necessary to achieve the desired moral outcome. The anterior cingulate cortex is implicated in recognizing and managing conflicting moral outcomes and sends a signal to the dorsolateral PFC to help adjudicate.

To be moral individuals we need an evolutionarily and culturally shaped automatic intuition about moral behaviors, especially for Me versus Us problems. We need the discipline to reason about difficult moral situations such as Us versus Them situations. Finally, we need the meta-awareness to know when to trust our instincts versus when to reason more deeply about the situation. If different groups have different opinions about whether a moral transgression occurred, the moral quandary is likely an Us versus Them problem; if there is no controversy, the issue is likely a Me versus Us problem.

Utilitarianism, a flexible and pragmatic philosophy which attempts to maximize the overall quality of peoples’ experience in the long run for all relevant parties, may be the best way for everyone to address difficult moral quandaries. Some criticize utilitarianism for expecting too much of people. Greene reminds us that expecting people to be perfectly selfless would undermine their own happiness and thus is inconsistent with utilitarianism. Utilitarianism simply asks us to be marginally less selfish. Conversely, some misunderstand the term “happiness” and criticize utilitarianism’s pursuit of happiness as frivolous and hedonistic. Utilitarians intend to encompass all the qualities that facilitate living a long, productive, and fulfilling life within the term “happiness” not just fleeting pleasures.

Greene concludes by offering advice for transcending our moral tribalism and acting in more universally moral ways. We must seek to reason about complex moral issues rather than rationalize our positions. Acknowledging our own ignorance may moderate our moral opinions. We should recognize—but be weary of—our moral instincts when confronting complex Us versus Them issues. Appeals to “rights” and “duties” are often counterproductive, as they silence debate rather than facilitate discussion. Finally, we can all afford to give more to “make the world as happy as possible.”

Greene, J. (2013) Moral Tribes: Emotion, Reason, and the Gap between Us and Them. New York: Penguin Press.

PREVIOUS
The Clash of Brain Development and Classroom Techn...
NEXT
Studying Mindfulness: An Interview with a Scientis...