Behave: The Biology of Humans at Our Best and Worst by Robert M. Sapolsky 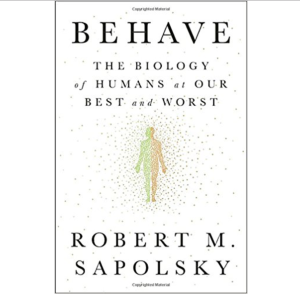 Humans are capable of horrifying aggression, dehumanization, destruction, and violence and at the same time inspirational altruism, compassion, and forgiveness. Drawing on an astounding array of evidence from across subfields within biology, neuroscience, psychology, and anthropology, Robert M. Sapolsky explains how people come to display these behaviors. Sapolsky, a Stanford University professor of biology and neurology, has recently written Behave: The Biology of Humans at our Best and our Worst. The book traces behaviors to occurrences in the brain, body, environment, and culture preceding an action on timescales ranging from seconds to thousands of years. Although long and intricate, the arguments are easy to follow because of the captivating integration of interdisciplinary research, the use of an informal, engaging tone, and appendices that aid in understanding basics of neuroscience, endocrinology, and proteins. This book is an excellent choice for those looking for a non-fiction book recommendation and for those committed to understanding how to harness the best of human behavior.

Although our best and worst behaviors do not begin in the brain, in the seconds before we act the factors that enable our actions converge in the brain. Sapolsky describes how our nervous system and particularly certain parts of the brain (e.g., the amygdala) contribute to our aggressive behaviors and how other parts (e.g., the frontal cortex) contribute to difficult but appropriate behaviors. Immediately preceding a behavior there are also cues in the environment that impact the decisions we make. These cues may be subliminal, verbal, visual, or from our body. Hormones such as testosterone and oxytocin impact the way we behave on a protracted timescale and as a function of their ratios relative to one another. Although the interaction between our genes and environment shapes our behavior, our genes influence our behavior to a lesser extent than most think, Sapolsky argues. Nonetheless, he offers an evolutionary perspective on how we have evolved to cooperate (or not).

A human development perspective is helpful in understanding how people behave the way they do. For example, Sapolsky reviews the fact that adolescence is a time during which individuals across cultures (and even species) engage in greater risk-taking, exploration, peer affiliation, and emotional reactivity. The brain’s frontal cortex, which supports engaging in self-regulation, is not yet able to operate at maximal efficiency. This contributes to adolescents exhibiting some aberrant behaviors. However, well before adolescence, during infancy and childhood, people are developing social and moral skills such as empathy, perspective-taking, and the delay of gratification that will contribute to their propensity to act in certain ways as adults. A child’s environment, including the parenting practices, culture, and socio-economic status to which they are exposed, affects their development on both biological and psychological levels. Sapolsky is careful to caution, however, that it is unlikely that childhood experiences will definitively lead to a specific adult behavior.

Sapolsky reviews cornerstone social and affective psychological research about how we identify with others, rank members of our groups, obey authority, act morally, and understand and alleviate other’s suffering. We naturally tend to form groups of “us” and “them,” and we tend to think of “them” more negatively than “us.” We form hierarchies that formalize unequal access to resources, although humans are unique among species in that sometimes those at the top of hierarchies try to serve the common good, and not only their own. All societies have rules about moral and ethical behavior, although there are cultural differences in morality. Religion likely evolved to help us do right, and belief in a judgmental god facilitates strangers interacting cooperatively.  While empathy can help us understand how others feel, it is actually an emotionally distant stance that helps us act more compassionately. Social neuroscientists have made sweeping claims about the role of “mirror neurons”—neurons that activate both when we perform an action and when we see someone else perform that action—in feeling and understanding other’s pain. Sapolsky cautions that the importance of mirror neurons in understanding and mimicking others’ behavior and taking their perspective has likely been oversold.

Sapolsky concludes by expressing his concern about flagrant injustices in the criminal justice system. Although he calls for major revision to the system and to how we treat those found guilty of crimes, on the whole he ends on a hopeful note. Overall, there is a trend towards the worst of human behavior declining (e.g., fewer murders, less denial of rights) and example after example of remarkably inspiring behavior occurring even in the most unlikely of circumstances. People are on average more generous with others than it is logical for them to be. Moreover, we have reason to be hopeful because, as Sapolsky demonstrates, we have an ever-growing body of knowledge about how to inspire the best of human behavior.

NEXT
How Best to Take Notes: A Public Service Announcem...