School includes lots of stress. And, sometimes that stress interferes with academic life. 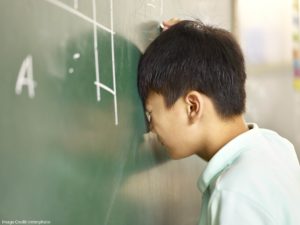 So, how can we help students manage their stress?

We’ve got some research suggesting that mindfulness helps. Can we do anything else?

Imagine that a student comes to me and says, “Whoa! I’m really stressed out about this test…”

My gut instinct might be to say something reassuring: “No worries — you totally got this. Just stay calm and I’m sure you’ll do fine.”

My student might try to persuade himself that he’s calm. But, all that physiological evidence reminds him — second by second — that he really isn’t calm.

Researcher Alison Wood Brooks wondered: could she encourage students to adopt a positive emotional framework with those same physiological signs?

Rather than encouraging a student to “be calm,” Brooks thought she might encourage him to “get excited.” After all, the bodily signs of excitement are a lot like those of stress. And, whereas stress feels mostly negative, excitement is (obviously) positive.

Testing (and Retesting) the Hypothesis

Brooks tested out this hypothesis in an impressive variety of stressful situations.

She started by having participants sing in a karaoke contest. One group prepped by saying “I am anxious.” A second group said “I am excited.” A third didn’t say either of those things.

Sure enough, the “excited” group sang their karaoke song considerably more accurately (81%) than their “anxious” peers (53%).

She then tried the ultimate in stress-inducing situations: public speaking.

Half of the speakers prepped by declaring themselves “calm” (which was my go-to suggestion above). The other half declared themselves “excited.”

As Brooks expected, independent judges rated the “excited” speakers superior to the “calm” speakers in persuasiveness, competence, and confidence.

One more approach may be most interesting to classroom teachers: a math test.

When getting reading for a “very difficult” test including eight math questions, students were told either “try to remain calm” or “try to get excited.”

You know how this story ends.

The students instructed to “get excited” scored, on average, about 1/2 point higher than their “calm” peers.

Every way that Brooks could think to measure the question, the advice to “get excited” proved more beneficial than the traditional advice to “remain calm.”

Perhaps this video, which neatly recaps Brooks’s study, will persuade you. Check out the handy graphic at 1:30.

One Response to An Unexpected Strategy to Manage Student Stress