I regularly tell teachers: if you want to be sure you’re right, work hard to prove yourself wrong. 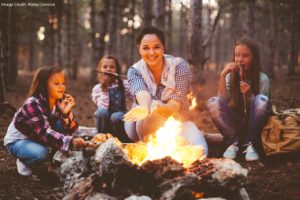 If, for example, you think that dual coding might be a good idea in your classroom, look for all the best evidence you can find against this theory.

Because you’ll find (a lot) more evidence in favor of dual coding than against, you can be confident as you go forward with your new approach.

Well: I got a dose of my own medicine today…

If you’re a regular reader, you know that I’m a summer camp guy. I’ve spent many of the happiest hours of my life hiking trails and canoeing lakes and building fires.

Many of the best people I know devote their summers to helping children discover their strengths and values surrounded by pines and paddles.

And: I’m not the only one. We’ve got LOTS of research showing that people prefer natural settings to urban ones. Some of that research shows this preference cross-culturally. It’s not just Rousseau-influenced Westerners who feel this way, but humans generally.

In fact, it’s easy to speculate about an evolutionary cause for this preference. Our species has been around for about 250,000 years; only a tiny fraction of that time has included substantial urban development.

If our preference for natural environments has an evolutionary base, then we would expect children to share it. They don’t need adult coaxing to enjoy the natural beauties to which their genes incline them.

Trying to Prove Ourselves Wrong

If we’re going to follow the advice above — that is, if we’re going to seek out evidence at odds with our own beliefs — we might wonder: can we find research contradicting this line of thought?

Can we find evidence that children prefer urban settings to rural ones? That they adopt adult preferences only slowly, as they age?

Researchers in Chicago worked with children and their parents, asking them to say how much they liked (and disliked) images of natural and urban settings.

And: that preference changed — almost linearly — as the children aged.

That is: the four-year-olds strongly preferred the urban images, whereas that preferential difference decreased as the children got older. (Figure 4 shows this pattern.)

You might reasonably wonder: doesn’t this depend on the environment in which the children grew up and attended school?

The researchers wondered the same thing. The answer is, nope.

They used zip codes to measure the relative urbanization of the places where these children lived. And, that variable didn’t influence their preferences.

So, contrary to my confident predictions, children (in this study, with this research paradigm) don’t share adults’ preferences. They prefer urban to natural settings.

To be clear: this study does NOT suggest that we should give up on outdoor education.

The researchers aren’t even asking that question.

Instead, they’re examining a plausible hypothesis: “our adult love of nature might be an evolutionary inheritance, and therefore we’ll find it in children too.”

These data do not support that plausible hypothesis.

But, they also don’t contradict the many (many benefits) that humans — adults and children — get from interacting with the natural world.

So, for me, the two key lessons here are:

First: when introducing young children to natural environments, don’t be surprised if they don’t love them at first. We might need to plan for their discomfort, anxiety, and uncertainty.

Second: even if we really want to believe something to be true; even if that “something” is super plausible — we really should look for contradictory evidence before we plan our teaching world around it.

By the way: here’s a handy resource to aid you in your quest for more effective skepticism.

NEXT
An Unexpected Strategy to Manage Student Stress