Yes or No: “Video Games Can Promote Emotional Intelligence”?

Some of your colleagues (probably) argue that video games curdle our students’ wits, addle their morality, and disrupt their attention. (For instance: here.)

Others (probably) argue that games are the future of education, and we should be getting on board as fast as we can. (For instance: here.)

As is so often the case, I think we should avoid sweeping generalizations. Instead, let’s look carefully at each specific research claim, and see what trends develop over time. 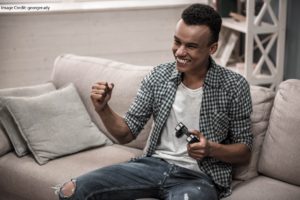 A recent example: “can videogames be used to promote emotional intelligence in teenagers”?

That suggestion, in fact, is the title of a recent study based on research in Italy. (In other words: I’m not exaggerating the claim. Those are their very words.)

This study, alas, is behind a (steep!) pay wall, so I can’t be sure of all the specifics.

At the same time, the study design looks promising. Some high-school seniors played 12 hours of a video game called “EmotivaMenta,” designed to be an “experienced based learning tool” to promote emotional intelligence.

Compared to a control group, they improved at recognizing their own emotions. And, they got better at managing their emotions by cognitive revaluation. (That means what it sounds like: deliberately thinking your way through a problem to which you initially had a strong emotional reaction.)

First, researchers note that these students got better at recognizing their emotions in the short term. But, when retested 3 months later, they were no different from the control group. (The trend-line for the “cognitive revaluation” isn’t clear.)

Second, the status of the control group isn’t clear. (Drat that paywall!) Was it an active control group? That is, did they do something similar to a video game for 12 hours? Or, was it a “business as usual” control group: just a bunch of students in the same school who didn’t do anything special?

Of course, we’ll be more persuaded by an active control group than a BAU group.

Third, notice that this was a specially designed video game.

When I read the title of the research, my first thought was that researchers had identified a commercially available game that, when used or framed the right way, increased emotional intelligence.

That’s not what happened.

Instead, it seems, they created a lesson about emotional intelligence in the form of a video game.

So, here’s a different answer to our revised question. Can a lesson about emotional intelligence in the form of a video game influence Italian high-school students?

In the short term YES–assuming the control group is active. But, in the longer term, it seems no.

Given those caveats, should we give up this effort? Should we conclude that video games can benefit perceptual capabilities, but not emotional ones?

My own view is: let’s keep looking.

After all, these researchers did have some success. Their study wasn’t a home run, but they did get some positive results.

So, perhaps this game would work better if …

…students played over a longer period of time, or

…it were played by younger students, or

…it were redesigned to include some cool new element.

After all, if we can help adolescents with their emotional self-regulation, that’s a real win. ESPECIALLY if we can do it by having them play a game they enjoy.

Simply put, I DON’T think we yet know the answer to this question. But, we DO have reason to believe that video games might be a promising avenue to continue investigating.

PREVIOUS
Why, and When, Does Music Interfere with Reading?

NEXT
What (De)Motivates Struggling Math Students?