The Yes Brain: How to Cultivate Courage, Curiosity, and Resilience in Your Child by Daniel J. Siegel and Tina Payne Bryson 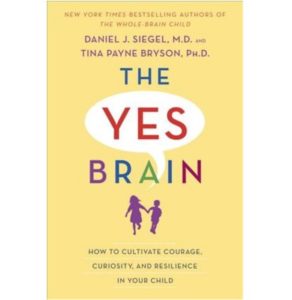 In their new book The Yes Brain: How to Cultivate Courage, Curiosity, and Resilience in Your Child, Daniel J. Siegel and Tina Payne Bryson offer parents guidance about how to support their children in “say[ing] yes to the world.” They argue that raising truly successful children who can create for themselves a life of connection and fulfillment means raising children who are not impulsively reactive but instead have the sense of balance, resilience, personal insight, and empathy for others to be receptive to the world around them. In the vein of making this book comprehensible to neuroscience novices, some scientists may note a lack of specificity about the neurological characteristics of the “yes brain.” This book includes cartoon animations of key concepts, prompts to build a “yes brain,” and a summary sheet of key characteristics of a “yes brain”, all of which makes it an accessible and useful tool for parents.

Siegel is a clinical professor of psychiatry at the University of California, Los Angeles School of Medicine, the founder and co-director of the UCLA mindful awareness research center, and executive director of the Mindsight Institute. Bryson is a pediatric and adolescent psychotherapist, director of parenting for the Mindsight Institute, and a child development specialist. Both Siegel and Bryson are New York Times bestselling authors, including of two books they previously co-authored, “The Whole-Brain Child” and “No Drama Discipline.”

According to Siegel and Bryson the “yes brain” is able to overcome challenges, remain flexible, and receptive to the world, while the “no brain” is reactive, and quick to attack, reject, or remain stubbornly fixed. The authors claim that the difference between a “yes brain” and a “no brain” is not merely a difference in mindsets but a difference in the brain’s response to situations. They draw an analogy between a brain and a house such that brainstem and limbic regions, which are fast-acting and supportive of life-sustaining functions, are the bottom floor of the house and the cerebral cortex, which supports complex thought and emotion, is the upstairs part of the house undergoing construction after the bottom floor has developed. They argue that balance, resilience, insight, and empathy are all supported by the prefrontal cortex in the “upstairs brain.” To suggest that there is not prefrontal cortex activity in reactive responses may not be accurate, but the authors are right to argue that there are neurological differences associated with being receptive versus reactive. Their “yes brain” construct may be best understood as a set of psychological and behavioral skills and mindsets.

Siegel and Bryson argue that balance or emotional stability and flexibility is important for finding success. It is natural for children to become imbalanced by acting out in a hyperaroused state or by shutting down in a state of hypoarousal. To help them regulate themselves, parents should remember that children do not like feeling imbalanced; they need a loving, soothing, understanding presence to help them return to feeling in control. Free play, diversifying the way one spends his time, prioritizing quality sleep, and receiving instruction about balance can promote balance.

Building resilience, or the ability to bounce back after failure, requires allowing children to feel the sting of failure so that in the long-run they can rise above setbacks. Parents need to allow kids opportunities to stand up for themselves as well as to intervene on their children’s behalf when challenges are too big to face alone. To build resilience, Siegel and Bryson argue for making it clear that reasonable risk-taking and failure are okay and for making children feel safe, seen, soothed, and secure.

Siegel and Bryson argue that children need to develop insight to understand themselves and have control over their social and emotional lives. One strategy to promote insight is taking well-timed pauses to act as a spectator of one’s own life. Parents can develop their own insightfulness by building a coherent narrative of who they are as a parent and a person and acting in a way that accords with who they want to be.

The final component of the “yes brain” is empathy. Siegel and Bryson remind parents that empathic abilities develop over the course of childhood and adolescence; so it is natural if youngsters do not always seem optimally empathic. Modeling empathic listening, perspective taking, and caring are critical for developing empathic kids. Parents can help children develop empathy by reframing situations with role playing, providing children with a vocabulary to communicate care, and exposing children to the way other people live.

Helping children develop an internal sense of self, a concern for others, and curiosity is likely to lead to deep and meaningful success. Siegel and Bryson argue that for parents’ to help their children develop balanced, resilient, insightful, and empathic “yes brains” they must allow kids to grow into who they will be while being prepared to help when children are in need of practice building these key skills.

PREVIOUS
Motivation vs. IQ: Which Is More Important?