What separates humans from other animals? What makes us uniquely human? 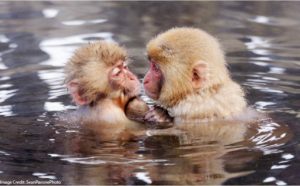 This question can be fun to debate. The most common answers — “tool use” and “language” — have their champions. However, lots of animals communicate with sounds. Several species use tools.

These abilities are rare among animals; however, they’re not uniquely human. So: what might be the key distinction?

A young girl comes into your office with her father. You show her a box full of M&Ms. The father then leaves the room, and you — quite conspicuously — pour out the M&Ms and replace them with pencils.

When the father comes back into the room, you ask the young girl “What does your father think is in the box?”

A five-year-old answers this question quite easily. Even though she watched you put pencils in the box, she also knows that her father wasn’t there when that happened. As a result, his knowledge differs from hers. He (falsely) believes that the box contains M&Ms, although she (correctly) knows that it contains pencils.

This ability to distinguish between what I know and what you know goes by the awkward name “theory of mind.”

In The Cultural Origins of Human Cognition, Michael Tomasello argues that theory of mind is the uniquely human cognitive trait.

Because humans think about what other humans are thinking, we have been able to develop our environment (think, skyscrapers) and our cognitive capabilities (think, calculus) with astonishing rapidity.

Each generation can hang onto the ideas developed by previous generations, and so progress beyond them.

I might say to you: “A platypus is in the elevator.”

Or I might say: “The platypus is in the elevator.”

This tiny linguistic difference (“a” vs. “the”) shows that I’m considering what you already know. In the first sentence, you don’t know about the platypus — even though I do. In the second sentence, we both know about it.

Tomasello connects theory of mind to human culture and development with remarkable dexterity and clarity; I highly recommend his book. (He’s also a lively speaker, if you ever have the opportunity to hear him.)

Only recently I stumbled across another possibility: the ability to remember sequences.

Stefano Ghirlanda and colleagues looked at research considering the ability to learn sequences among a variety of species: various birds, macaques, even dolphins.

It turns out that humans can pick up complex sequences quite quickly.

In one study, for example, humans listened to a sequence of sounds, and were able to remember them with 90+% accuracy after 6-8 trials. Zebra finches, however, took between 300 and 800 trials to achieve the same level of accuracy — even though the sounds were zebra finch song syllables.

In another study, rats could learn what to do after individual signals with relative ease. To learn a series of signals, however, took on the order of 10,000 trials. You read that right: ten thousand.

(Imagine being the graduate student whose job it was to do all 10,000 trials.)

Ghirlanda and colleagues argue that sequence processing underlies all sorts of complex human cognition: episodic memory (this happened before that), planning (step one, then step two, then step three), even music (this series of notes isn’t that series of notes).

Without our ability to process those sequences, we would hardly be human.

First, Ghirlanda and colleagues note that other species are good at remembering sequences that have to do with evolutionarily important processes: the steps required to capture food, for instance, or to attract a mate.

Perhaps, in other words, this ability helps make us human, but isn’t uniquely human. Until we study more species, we can’t know for sure.

PREVIOUS
Teens and Cell Phones: The Good, The Bad, The (Not...

NEXT
Point/Counterpoint: Escaping the Inquiry Learning ...