The Nurture Effect: How the Science of Human Behavior Can Improve Our Lives and Our World by Anthony Biglan, PhD 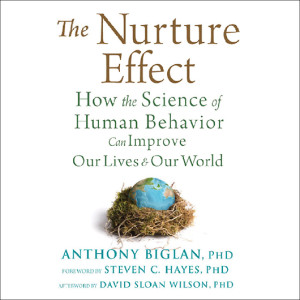 What if there existed a secret recipe for curing nearly all of our most serious societal ills? Dr. Anthony Biglan, a Senior Scientist at the Oregon Research Institute and an expert on the prevention of problematic behaviors in children and adolescents, may have that very recipe. In his new book, The Nurture Effect: How the Science of Human Behavior can Improve Our Lives and Our World, Biglan argues that that our social and health problems would be greatly lessened—and we would have a more fulfilled and healthy citizenry—if we had a more caring society. Specifically, we would benefit from our families, schools, and communities being more nurturing and from our economic and political practices being more equitable and far-sighted. He argues that recent advances in psychological, behavioral, and developmental sciences have shown that the root cause of most of our major social challenges is our experiences in insufficiently nurturing environments. Through a series of concrete action items targeted towards parents, teachers and schools, regular citizens, and policy makers, Biglan shows us steps we can take to bring about this improved society.

After providing an overview of recent advances in the behavioral sciences that support the creation of nurturing environments, Biglan argues that families and schools are especially important environments for fostering nurturing relations. In homes and schools, we need to reward those who behave in a way that is considerate of others, help them think flexibly about solutions to challenging situations, teach them to regulate their emotions, and minimize the extent to which they feel coerced. To illustrate the implementation of these practices Biglan discusses intervention programs that have helped individuals and families create habits that nurture.

Biglan espouses B.F. Skinner’s idea that environments shape behavior. Most troubled teens are the product of environments that were insufficiently nurturing. Teens need limits, as well as, healthy relations with peers. They benefit from being around other teens with healthy and productive habits. He argues that we need schools to consistently implement evidence-based teaching practices, reinforce students’ good behavior, and let student learn by engaging in self-directed discovery.

While families and schools are vital places for increasing nurturance, Biglan states that we need also to make more nurturing the larger social structure in which families and schools are embedded. There are many organizations that address a single societal ill (e.g., drunk driving, homelessness, child abuse), but there are few umbrella organizations that attempt to address the root cause of all these problems, which is what Biglan argues we really need. Additionally, we need to curb predatory marketing practices, just as we did so effectively a few decades ago with curbing cigarette advertising, especially to teens. Beyond marketing, our materialistic culture leaves most of us feeling perpetually dissatisfied because we feel that what we have is never enough.

Biglan is concerned about growing economic inequality. He argues that many of us fail to conceive of just how challenging it is to live in poverty and just how easy it would be for even responsible and prosperous citizens to find themselves in poverty. We all suffer when poverty is widespread because such poverty leads to prevalent long-term health and behavioral problems. Biglan urges action to reduce child poverty. He argues that minimizing government spending, including on child poverty, is short-sighted because spending now could prevent much larger expenditures later.

Biglan concludes by sharing his vision for a society in which everyone enters adulthood ready to cultivate nurturing relationships and to create nurturing environments. The four most critical steps to help young people develop into caring adults is to model for them how to: 1) minimize toxic influences; 2) reward prosocial behavior; 3) limit opportunities to engage in aversive behavior; and 4) promote a flexible approach to living in accordance with one’s values in the face of challenging circumstances. Stress can erode a person’s health and the most common source of stress is managing other peoples’ coercive behavior. As such, for the sake of our collective health and well-being, we need to support one another in “turning the other cheek” in response to other people’s bad behavior, developing empathy, and paying attention to the present moment. With the steps Biglan suggests, we can all contribute to bringing about a social movement focused on creating nurturing environments to bring about, in turn, a brighter future.

Biglan, A. (2015). The nurture effect: How the science of human behavior can improve our lives and our world. Oakland, CA: New Harbinger Publications.

NEXT
In the News