The Fear Factor: How One Emotion Connects Altruists, Psychopaths, and Everyone In-between by Abigail Marsh 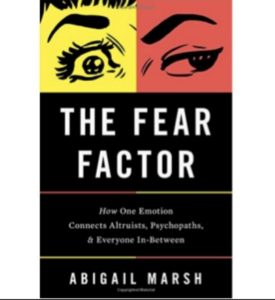 , reviews research by her and others showing that extraordinary altruists and psychopaths may be two extremes of a bell-curve of human caring with altruists and psychopaths distinguished by how sensitive they are to feelings of fear. She employs an evolutionary perspective to argue that having evolved to care for vulnerable young has equipped us with the neural architecture to care for other people more generally. She concludes by arguing that we both can and should strive to be more altruistic.

Marsh, associate professor of psychology at Georgetown University, has herself been both the beneficiary of extraordinary altruism and the victim of assault. At age 19 she was in a serious car accident that might have left her dead had an anonymous stranger not intervened, at great risk to himself, to rescue her. A few years later a man she did not know grabbed her in a sexually inappropriate manner. When she reacted with outrage, he proceeded to punch her in the face, knocking her to the ground. Marsh has devoted her career to understanding the roots of and individual variability in these extremes of behavior, how we can help people with psychopathic tendencies, and how we can behave more like altruists.

Early in her career, Marsh uncovered a peculiar relationship; the ability to recognize fear in faces predicted altruism. This effect held across different types of altruistic actions and was more robust than many factors that had traditionally been expected to be closely related to altruism. Intrigued by this, she went on to study responses to fearful faces in children and adolescents known for their lack of altruism and lack of remorse for causing other people pain—youth with callous-unemotional traits (or psychopathic tendencies). Marsh conducted functional MRI scans of the brains of these youth as they were exposed to faces displaying different emotions. Previous research had suggested that the amygdala—a brain structure located deep in the middle of the brain—responds strongly when an individual is exposed to fearful expressions. In children with psychopathic traits, however, this brain pattern was not observed—a fact consistent with these children stating that they rarely experienced fear. It may be that psychopathic individuals’ impaired ability to feel fear impairs their ability to empathize with others’ fear, and this makes it difficult for them to understand why it can be wrong to make people feel afraid.

Given that many human traits can be modelled with a bell-curve shape and that the distribution of psychopathy in the population looks like a bell-curve cut in half, Marsh hypothesized that perhaps a normal curve could be constructed to represent the full distribution of caring in the population with extraordinary altruism balancing out psychopathy. Although many people engage in altruistic actions frequently, extraordinary altruists do so for people they do not know at great cost to themselves, even when there is no expectation to do so.

Humans can function normally with one kidney but are born with two. Anonymous kidney donors—people who voluntarily undergo kidney surgery, incurring financial costs and medical risks, in order to give one of their kidneys to person they do not know—served as an ideal case study of extraordinary altruists. Marsh recruited these extraordinary altruists to undergo similar functional MRI scans to the ones she had had youth with callous-unemotional tendencies undergo. Interestingly, she identified complementary findings. Extreme altruists’ amygdalae were especially responsive to fearful faces and their right amygdalae were about 8% larger than those of people in the general population. Marsh concludes that, although there is a common trope that extraordinary altruists are fearless to be able to help others in the way they do, on the contrary these individuals are actually hypersensitive to the fear of other people and motivated to act because of it.
That hypersensitivity to fear may stem from a co-opting of our parental instincts. We have evolved to love our small, underdeveloped babies, enjoy physical contact with them, and produce nutritious mother’s milk to feed them. We are built to parent, and are drawn to provide care for other beings, even those who are not our children.

Marsh argues that people are more compassionate than we typically recognize. Better quality of life is associated with greater caring. Thus, as quality of life continues to improve, more people may become increasingly compassionate. To bring about greater altruism we should cultivate a humble understanding that strangers’ welfare is worth as much as our own. Most simply, Marsh argues that there is a virtuous cycle of giving, so, “if you want to be more altruistic, just start!” (P. 50).

Marsh, A. (2017). The Fear Factor: How One Emotion Connects Altruists, Psychopaths, and Everyone In-between. New York: Basic Books.

PREVIOUS
Using and Misusing Averages: The Benefits of Music...

NEXT
How to Stop Cheating: An Awkward Debate