The Downsides of Desirable Difficulties

For several years now, we’ve been talking about the benefits of “desirable difficulties.”

For instance, we know that spreading practice out over time helps students learn more than does doing all the practice at once. 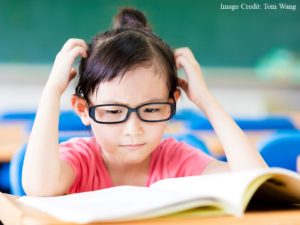 Why? Because that schedule creates greater mental challenges. Our students must think harder.

Likewise, we know that jumbling many topics together during practice helps students learn more than does practicing only one thing at a time.

Why? Students face greater cognitive challenges as they try to figure out which strategy to use or topic to notice.

And: requiring students to use retrieval practice helps them lots more than simple review.

A theory that is simultaneously counter-intuitive and common-sense. What’s not to love?

I’ll tell you what’s not to love: the big silence.

And yet, very few people ever discuss — much less research — this topic.

So, what exactly would an undesirable difficulty be? How can I predict or spot them?

I discuss this question with teachers quite often, and I have two sets of suggestions.

At a Learning and the Brain conference a few years ago, Dr. Robert Bjork (who coined the phrase “desirable difficulty” with his wife, Dr. Elizabeth Ligon Bjork) explained that DDs have two core features.

First: they require students to think harder about the material.

By implication, difficulties that don’t meet those criteria aren’t desirable.

For instance, I’ve just assigned a final project on Macbeth to my sophomores: they must think about the play, create a new something (a set design, a costume plot, a new scene, etc.), and then explain their thinking.

I’ve warned my students quite strictly: they may use technology, but they should NOT get carried away with all the cool tech possibilities at hand.

If they know how to edit videos and want to shoot a scene, that’s fine. But they should not simply throw in 1001 cool editing effects. Those edits would make them think harder, perhaps, but not think harder about the play.

The work would be difficult, but not desirably difficult.

So, too, I might ask my students to write a sentence that uses noun clauses as both the subject of the verb and as an appositive, and also uses an introductory subordinate clause as an adverb.

Again: a difficulty, but not a desirable one.

In other words, we want to ramp up the difficulty — but not too far — without letting the focus subtly shift to another topic.

So, difficulties aren’t desirable if they don’t meet both of Bjork’s criteria.

So, I can make attention more challenging by — say — playing loud music while students read.

I can vex my students’ working memory by giving them ten verbal instructions to remember and follow.

I could fiendishly reduce my students’ motivation by inculcating a fixed mindset.

You know the answer. That additional difficulty would in no way be desirable.

In other words, a few specific difficulties (spacing, interleaving, retrieval practice) can be desirable. Most others, however, simply are not.

Desirable difficulties — which require students to think harder before they succeed at their work — can foster deeper learning.

However, most classroom difficulties don’t meet that definition, and therefore aren’t desirable.

Whenever we champion desirable difficulties, we should be sure to mention and guard against the undesirable ones that imperil students’ learning.