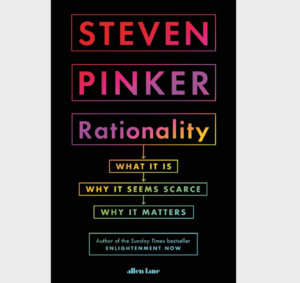 Over the last couple of years, we have often felt like the world is losing its collective mind. The news is profuse with interviews and shocking examples of apparent declines in rational thinking, and we are faced with regular internet propaganda that seems to assume we are not able to sort out the reasoned from the crazy. We are left to wonder “Why do people believe such crazy things? What is the human race coming to?” and we may begin to question our own sanity.  But there are plenty of books and studies out there that marvel at our irrational thinking already. Instead, Steven Pinker takes a less cynical view of human nature in Rationality: What It Is, Why It Seems Scarce, Why It Matters. While he understands the appeal of studying cognitive bias and distorted perception, he laments the exoticization and excessive attention on our seemingly irrational behaviors and celebrates the evolutionary achievement of a rationality toolbox that has been tested by time and continues to be robust.

This book was developed from a course Pinker taught at Harvard at the request of his students who were similarly having trouble making sense of this current reality and wanted tools to aid in social transformation. The reading is dense, but reads like a masterclass or engaging college course, mixing content with humor and politics, through Pinker’s usual excellent teaching and way with words.

Pinker introduces rationality through a unique intersection of evolution, psychology, and cultural anthropology. He begins by asking an important question: where and why does rationality emerge? In particular, he points out that logic, statistics, and scientific reason are not the sole products of some western or eastern modern enlightenment but are instead a natural progression found cross-culturally as a human adaptation to complement our biased cognition. Rationality is “a kit of cognitive tools that can attain particular goals in particular worlds” so it, therefore, emerges wherever humans flourish.

Rationality is not only available to the ivory-tower academics that pour over texts; it is available to everyone and can be found in unexpected places as a natural development. One example that Pinker returns to here from his previous work is the San people of the Kalahari desert, a modern hunter-gatherer society who have developed a well-tuned scientific set of reasoning skills that have allowed them to adapt to their environment. Far from intellectually primitive, the San people employ critical thinking and hypothesis testing in their daily lives. They use skills we attempt to teach our children. The San have developed advanced skills of probability theory and logic that allow them to use the information in their environments to their advantage: Bayesian reasoning is utilized to determine which tracks to follow when hunting; their survival depends on knowing the difference between correlation and causation. In addition, there is a kind of peer review process wherein an argument to methods of hunting or gathering can be brought by any individual into group discussions from which the group can evaluate new ideas and accept or reject those ideas based on their merits.

But this book is not about the San it is about finding rationality in our daily lives and applying it. The core of the book examines many of the classic studies by Thomas Schelling, Daniel Kahneman, and Amos Tversky who studied cognitive bias; but Pinker now recontextualizes them showing that regardless of our apparently irrational behavior, humans have evolved rationality and logic to guide our living in the world.

As you move through the book, you will encounter arguments about our better nature, about the opportunities rational thinking brings, and even some critique of politics and social institutions. The reader can enjoy engaging in a critical discussion concerning the shortcoming and opportunities of both the political right and left, but Pinker also takes political stances that may be unpopular and not always what one would expect. Whether you agree or not, this honest intellectual engagement is refreshing, gets the blood pumping, and prepares one for lively dinner table discussions.

One of the main goals in education is to scaffold the development of the rational thinking process. While the book is not on education per se, it brings to consciousness the thinking processes we want to see in our students, ourselves, and our social institutions. It also has some fun thought experiments that can be adapted to the classroom. But, moreover, this book takes us back to the rational and grounds us in reasoning skills that we too often take for granted. It gives us something to hold onto and appreciate even when the world seems out of its mind.

PREVIOUS
Too Good to be True: When Research and Values Coll...

NEXT
The Downsides of Desirable Difficulties