The Deep History of Ourselves: The Four-Billion-Year Story of How We Got Conscious Brains by Joseph LeDoux 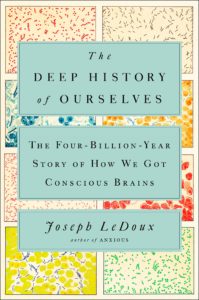 New York University Professor and National Academy of Sciences member Joseph LeDoux recently published The Deep History of Ourselves: The Four-Billion-Year Story of How We Got Conscious Brains. He argues that understanding the evolutionary history of life on earth, which began 3.8 billion years ago, can help us understand ourselves, including our emotions and conscious experience. LeDoux reviews the organization and interrelation of species and discusses major evolutionary breakthroughs along the way to human consciousness. All life forms share certain basic survival behaviors—including managing resources, warding off harm, and reproducing–that were passed on from the last universal common ancestor. Although our mental life and its connection to behavior may be evolutionary byproducts of other selection pressures, our cognitive abilities have emerged as our unique advantage. LeDoux argues that our ability to engage in conscious thought can make us selfish and greedy, but it is also our best hope for combating looming challenges in our world to support our continued survival as a species.

The Deep History of Ourselves offers an overview of evolutionary history that is at once thorough and approachable. It wades into our ongoing quest to understand human consciousness by advancing sophisticated ideas about what consciousness is, how we got it, and why it matters. This book will be of interest to a general audience seeking to understand how, evolutionarily, humans came to be creatures who can think and feel emotions, including about the self.

LeDoux reviews the science showing that the universe began 13.7 billion years ago and that the first life form emerged 3.8 billion years ago when inorganic elements exposed to tremendous heat became biological compounds. Bacteria, which emerged 3.5 billion years ago, are the evolutionarily oldest life forms that still exist today. Bacteria have developed the ability to survive and proliferate in a great diversity of contexts. Unlike bacteria, eukaryotes can reproduce sexually, which was a major innovation in that it allowed for greater genetic diversity.

LeDoux then discusses bilateral symmetry which about 99% of animals have at some point in their development. Bilaterality contributed to greater mobility and more complex predator-prey relations. Bilateral animals typically have neurons that facilitate communication across long distances in the body and integrate sensory-motor information. Neurons support more sophisticated and flexible learning.

Spines were another major evolutionary change.  Vertebrates, which have spines, are a diverse group who trace their origins to an aquatic animal. Some major evolutionary developments among groups of vertebrates including the ability to breath oxygen from air rather than water, the ability to reproduce through intercourse, the ability to gestate young in an internal placenta, the four-chambered heart, and improved color vision and smell. Charles Darwin helped us come to understand that humans are related to and exist along a continuum with other animals.

About ten thousand years ago Homo sapiens began to dominate. LeDoux describes the components of our central nervous system, including that the hindbrain may support evolutionarily old reflexive behavior while the forebrain is responsible for evolutionarily newer cognition, learning, and memory. Cognition, according to LeDoux, is a biological process made possible by the nervous system. Our ability to hold information in mind, recognize patterns, and deliberate about and select among possibilities are among our advantageous cognitive skills. LeDoux draws on the work of other prominent scholars to show that we have become so smart not only because of these cognitive skills, but also because of cultural tools and knowledge, especially language, which have allowed us to efficiently amass and share knowledge across generations. These cultural forces even shape our conscious awareness of the self.

Departing from other prominent consciousness scholars, LeDoux argues that our subjective feeling experience is equivalent to our emotions. He argues that we cannot have unconscious emotions, but that nonconscious factors do contribute to the experience of emotion. LeDoux argues that much of the time we are not consciously aware of what we are doing, but that being able to take conscious control of our actions, and use that to transcend the present moment and build an understanding of the self, is a powerful ability. The front most part of the brain—the frontal pole—plays a key role in these sorts of highly integrative, complex experiences. Although other animals do have minds that can think, plan, and remember, and although all species share certain survival-related activities, it is difficult to know which animals have consciousness. Emotions, according to LeDoux, indicate that something significant is happening to you. We have a sense of self because it allows us to build personally relevant meaning through our emotional experiences of dynamic situations.

The Deep History of Ourselves is an important book because understanding human consciousness is critical given that our future as a species depends on our ability to use our conscious minds to address imminent global and environmental threats.

LeDoux, J. (2019). The Deep History of Ourselves: The Four-Billion-Year Story of How We Got Conscious Brains. New York, NY: Viking

NEXT
How Best to Achieve our New Year’s Resolutio...