Chapter 2 of Inventing Ourselves: The Secret Life of the Teenage Brain kicks off with a teenager’s diary entry from April of 1969:

I went to arts centre (by myself!) in yellow cords and blouse. Ian was there but he didn’t speak to me. Got rhyme put in my handbag from someone who’s apparently got a crush on me. It’s Nicholas I think. UGH. 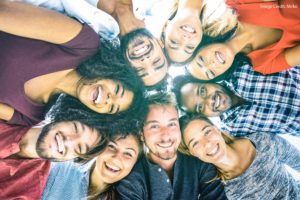 Self absorbed. Dotty about crushes and boys/girls and clothes. Too addled by hormones to focus on epochal events — like, say, Neil Armstrong’s small step onto the moon.

In Defense of the Adolescent Brain

Researcher Sarah-Jayne Blakemore would like to change your mind about all of these perceptions.

Drawing on decades of research, she focuses on one essential claim. Teenagers’ brains aren’t incomplete versions of adult brains. They’re not hyper-hormonal versions of children’s brains.

Instead, adolescence results from distinct, meaningful neural developments. Teenagers do the developmental work that their life stage calls upon them to do. Their brains help them along with exactly this task.

The Stories that Science Tells

More than most researchers, Blakemore manages to describe scientific studies precisely and readably.

You get a very clear picture of what researchers did, and why they designed their experiments as they did. And: what they learned from doing so.

(I try to do exactly this almost every day on this blog, so I can tell you: that’s REALLY hard to do well.)

As a result, you’ll come away with a clearer understanding of the cognitive developments that take place during the teenage years.

Also, some of the surprising deficits. (Teenagers are worse than 10-year-olds at recognizing emotional facial expressions!)

By the way: teens also don’t recognize the difference between high- and low- stakes as well as we would expect.

Because of Blakemore’s clarity, you’ll also know how we know each of these truth.

Blakemore doesn’t end with a step-by-step program for teaching or parenting teens.

Instead, she offers a way of thinking about this vital stage of development.

She helps us step back from day-to-day adolescent conflicts to see the bigger neuro-biological picture.

She also resists the popular temptation to rage against technology use. Based on her lab’s analysis (undertaken by one-time LatB blogger Kate Mills), we don’t really know enough about technology use to draw firm conclusions about its perils.

In particular, we don’t have good at all about the influence of adults’ technology use on the children around them.

In brief, we should read Blakemore’s book not for quick solutions but for long-term perspectives.

NEXT
Choosing a Knowledge-Rich Curriculum: Pros and Con...