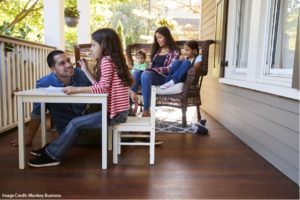 Can these programs help more if extended by the parents?

Preschool for Parents: The Study

Researchers at Penn State worked with families who were already a part of the Head Start program.

Half of the participants got home visits. These included “activity boxes” with games that promote both cognitive and social-emotional skills.

Karen Bierman, one of the researchers, describes one such activity — playing a “restaurant” game:

While playing with their imagination is fun for the children, they also get to practice their letters and language skills as they take their parent’s “order” and mix up alphabet soup. Additionally, the program teaches parents how to use picture books to start conversations with their kids about feelings and social problems.

The home visitors also coached parents in such skills as precise praise and collaborative problem solving.

The other half of the participants were mailed age-appropriate math games to play with their children.

Preschool for Parents: The Results

Impressively, the researchers looked for results not hours or weeks later, but YEARS later. Specifically, they returned to these families when the children were in third grade.

Did the home visits help more than the math games?

In two words: a lot.

Parents who got home coaching reported considerable benefits for their children.

They did better in school. (For example: they knew more sight words.)

The were better at focusing on tasks, and on understanding the dynamics of a social situation.

The parents reported less stress and fewer problems with their children.

They even needed fewer social services.

Again: these changes appeared years after the home visits happened. In other words, the visits had a long-lasting positive effect.

(One enduring criticism of Head Start is that its effects wear off quickly. This criticism — called “fadeout” — is misguided in general, and clearly doesn’t apply in this research.)

This study compares several variables at once.

One group of children got imaginary play games; the other got math puzzles.

One group of parents got home visits; the other got stuff in the mail.

For this reason, its hard to know which variable mattered more: the content (social games vs. math puzzles) or the home visits themselves.

At the same time, we have good reason to believe that these home visits really helped — and helped over time. Preschool for parents works.

PREVIOUS
You Are a Learning Style of One

NEXT
Don’t Miss This Handy Compilation of Researc...