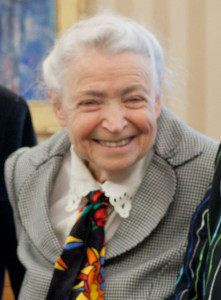 If you watched the Oscars this past weekend, or simply had lucky t.v. timing over the past few weeks, you may have caught GE’s newest commercial featuring MIT scientist Millie Dresselhaus. The ad aims to promote GE’s upcoming diversity endeavor: 20,000 women in science, technology, engineering, and math (STEM) jobs by 2020. It’s a lofty goal, and I’m rooting for ‘em.

This initiative comes in response to only 18% of GE’s technical workforce being female. Although worrisome for both equity and economic reasons, this statistic is not unusual in the STEM student or professional world. We may be wondering: how has GE, and numerous other similar companies, achieved such low female employment and retention? Which is also to ask: what does it mean for women to persist in the STEM world, and what kind of internal oomph does it take? Luckily, researchers have begun to tackle both questions.

Fewer girls and young women engage with STEM at the advanced placement, college, and career levels than do males. A report published by the National Science Foundation (NSF) found that women represent only around 35% of college students enrolled in physics, mathematics, and computer science courses, and less than 10% of those studying physics and engineering at the graduate level. [1]

Also of concern is the high rate of attrition seen in those who complete undergraduate study and enter the workforce. This turnover leaves women holding only 22% of the math and science jobs available in the U.S.

A Couple of Questions Out of the Way…

Researchers have approached this gender disparity from different angles in hopes of better understanding what is happening.

Some have asked: is it perhaps so that males are just more able mathematicians than females? This conclusion seems unlikely, given that gender differences in math performance barely exist early in development, and tend to emerge at the high-school and college levels. [2]

Others hypothesized: maybe boys are just more interested in STEM than girls? This also seems a stretch, with research showing that throughout at least the elementary school years, a high percentage of both boys and girls (68 and 66 percent, respectively) report liking science. [3]

(See also my fellow-blogger’s post about raising girls’ levels of math participation in the US and India.)

A different approach, then. Several studies have gone beyond theories of disproportionate aptitude and interest and begun to question if social pressures and expectations affect girls’ pursuit of STEM. If yes, then how?

In one such study, researchers at Brown University and Williams College studied the interaction of stereotype threat and mathematics performance in female students. [4]

Stereotype threat is a social occurrence whereby the targets of intellectual inferiority stereotypes, such as women or racial or ethnic minorities, perform more poorly at a task when in an environment that reminds them of this stereotype, such as in the presence of males or the racial or ethnic majority. [5]

The researchers found that women in the minority condition performed more poorly on the math test than did women in the same-sex condition (males did well on the test despite condition).

The female participants’ performance was also found to be proportional to the number of males in their group, such that women in a mixed-sex majority condition (i.e. two women and one male) still experienced performance deficits as compared to women in the same-sex condition.

Given their findings, the researchers suggested that women in STEM courses or jobs, where their colleagues are predominantly male, may experience stereotype threat. As a result, they are at-risk of performing below their ability, and thus at-risk for attrition.

In another study, students at two universities completed assessments of working memory and mathematics, as well as a self-report anxiety scale regarding their feelings about math.  [6] The results statistically demonstrated a chain effect: female students had higher anxiety about math, which in turn affected the working memory resources they needed to complete the math tasks, which in turn lead to lower performance.

The researchers discussed this chain as lending support for Processing Efficiency Theory, which suggests that anxiety negatively affects the central executive component of working memory. The central executive is responsible for processing information stored in verbal and visuospatial working memory, both of which come in pretty handy when completing mathematics tasks.

There’s Probably More to Persist Through than we Think

Studies such as these suggest that our social environment likely has a large impact on how women navigate, among other things, the STEM world. So we ask: what engenders women’s worried feelings around mathematics? How are messages of inferiority transmitted? After all, most girls grow up with some combination of family members, teachers, and/or other role models reciting the message that girls can excel in STEM just as boys can. Yet we still see that, by age six, girls are more likely to group boys into the category of “really, really smart” than they are to categorize their fellow ladies as such. [7]

First, let’s not underestimate the messages that waft in the background of girls’ daily lives. For example, picture a middle school student sitting down at her kitchen table to work on science homework. She can faintly hear CNN from the living room t.v. as she works on a diagram of Newton’s laws of motion. And what CNN happens to be covering that evening is Nobel scientist Tim Hunt’s rationale for promoting gender-segregated workplaces, which is that women in science laboratories are too at-risk of falling in love with their male colleagues.

Collective groan…but so what? Surely CNN will move to another story, the diagram will be skillfully completed, and the student will clear her books from the table so that she can eat her dinner. But not so surely will that story’s message be erased from her subconscious. And that’s a big ‘what’.

Second, as adult women and educators, we should try to get in the habit of taking a look at our own emotional navigation of STEM. Again, let’s not underestimate: one study recently found that heightened math anxiety in female teachers at the beginning of the school year is associated with lower math performance over that school year for their female students. [8] And that anxiety is communicated much more subtly than seeing a math problem and making a run for it.

In other words: better understanding our own subconscious relationship with, and reactions to, STEM disciplines can help us better understand the implicit messages that we transmit to young girls.

Third, let’s talk about it. Now, I would be remiss not to include the caveat that we cannot fully encourage girls to pursue, and persist in, STEM without also considering the importance of encouraging boys and young men to pursue female-dominated fields, such as nursing and early childhood education. Nonetheless, researchers have suggested that efforts to mitigate gender differences in math-related fields are inadequate unless they target specific factors, such as worry about math, in girls and women. [9]

So let’s talk about that worry. And, given what we know about social psychological phenomena (e.g., the prevalence of stereotype threat), the positive effects of such conversations may be maximized within all-girls STEM classes and extracurriculars. A quick Google search can lead us to organizations, such as Girls Excelling in Math and Science (GEMS), the Laurel School’s Center for Research on Girls, and NSF’s National Girls Collaborative Project, that are eager to provide guidance and resources for exactly this purpose.

Because oddly enough, the best way to empower girls to brush off gendered nonsense like Tim Hunt’s argument for workplace segregation, may just be to separate boys and girls for a bit.

NEXT
E-Readers and Reading Comprehension