(Of course, not all evidence points this way.) 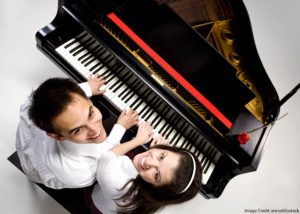 If it’s true that music lessons help language development, we might wonder why? What is the relationship between music and language?

Or, perhaps those lessons improve students’ ability to hear sounds precisely — and that skill transfers to language improvement.

Which theory pans out?

Researchers in China worked with three groups of 4- and 5-year-olds.

Did these children develop differently? That is: were their language skills different? Were there IQs different? How about their working memory scores?

On the general cognitive measures, all three groups advanced equally.

That is: IQ scores, working memory scores, and attention scores all improved — but they improved roughly the same amount for all three groups.

Music lessons (and reading lessons) didn’t slow down cognitive development, but they didn’t speed up that development either.

Music and Language: Vowels and Consonants

However, when it came to speech sounds, the different kinds of training did make a difference.

The 4- and 5-year-olds who studied piano, and also those who practiced reading, improved in their ability to recognize vowel sounds. And: they got better faster than those who did neither of those things.

Also: those who studied piano got better at recognizing consonant sounds faster than both the other groups.

Needless to say: recognizing consonants is really important in language processing. Children need to distinguish between “had” and “hat,” “morning” and “warning,” “choose” and “shoes.”

This study starts to answer our question. Music doesn’t make us smarter in a general way, but it does help us tell sounds and words apart.

Researchers often want to know about “transfer.” Does learning one thing make me better at this other, largely unrelated thing.

For example: do piano lessons in childhood make me better at calculus in high school? (It’s really hard to be sure.)

However, it does not support a “far-transfer” hypothesis. Music training didn’t make children “smarter,” at least not in the ways that we typically measure “smart.”

At the same time, other researchers have found a relationship between music lessons and memory.

As always, look at the very narrow claims that researchers make and support. We should resist the temptation to generalize — especially when we’re talking about “transfer.”

NEXT
Do Stress, Age, or Stereotypes Harm Your Working M...