Montessori: The New Science behind the Century-Old Methodology (part II) 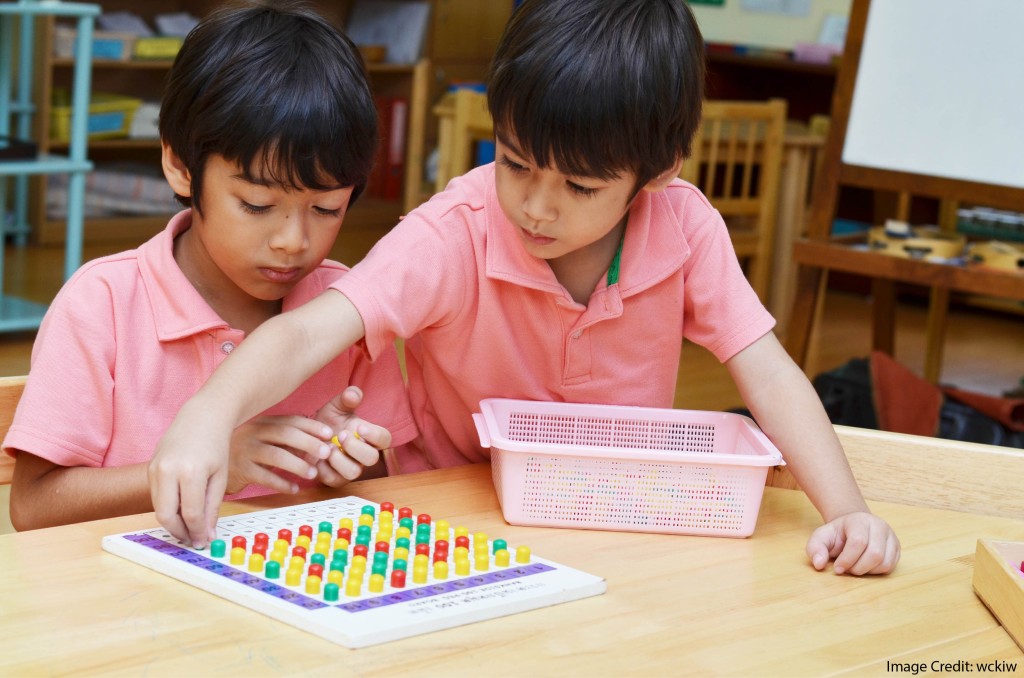 “Freedom in intellectual work is found to be the basis of internal discipline” (*Montessori, 1917/1965).

This quote highlights a notion which goes completely against our conventional wisdom. Internal discipline is to be instilled externally. Students develop discipline through following top-down instruction, no? They are told what to do and they do it.

Much of what Maria Montessori intuited about child development and education seems to fly in the face of the systems we have in place to educate our youngest citizens. There is no doubt that the insistence on obedience can create disciplined individuals; however, in regard to intellectual pursuits, if we desire individuals who are self-driven, allowing them a certain freedom in what they pursue enables them to develop this drive themselves.

In this post, we delve into principles five through eight, continuing from a previous post. While there are many examples of each of these principles in the Montessori classroom, I bring up one or two examples and just some of the science backing them up.

In a primary Montessori classroom (children ages 3 to 5), younger children may often work side by side, though not collaborating. As children get to be 4 and 5 years old, they begin to work together. At this age, and especially at the elementary level, collaboration is suggested and encouraged by the teacher.

Developmental psychologist Jean Piaget, who was 26 years younger than Maria Montessori and was involved in and presumably inspired by her work, also notes the importance of learning from peers. He believed that peer interaction, and the presentation of different ideas that comes along with it, creates states of cognitive disequilibrium where children must then “accommodate” these new concepts, advancing their understanding.

Lev Vygotsky, another developmental psychologist, believed that children learn in what he called the “Zone of Proximal Development.” This “zone” consists of tasks that one cannot accomplish, or conceptual understanding that one cannot attain, alone. Older peers allow their younger counterparts to accomplish tasks and reach higher levels of understanding.

Research has confirmed the benefits of social learning. Young children may benefit the most from observation, rather than interaction (*Azmitia, 1988). Yet, as children grow older, and especially in the elementary years, they are able to make gains through collaboration (*Tomasello, et al., 1993). Once children are able to engage in a dialogue that contains explanations, inferences, strategies, etc., collaboration has been found to improve their cognitive performance, compared to children who work alongside peers but are discouraged from talking, much like in traditional schools (*Teasley, 1995).

As with the learning that takes place in traditional schools, “people are prepared for life by exclusion from it” (Montessori, 1967a). Investigation into some topic, void of the context of the topic, prevents the learner from engaging with it as deeply as she would be able to otherwise.

In the Primary Montessori Classroom, context is given via hands-on materials that are connected with the outside world. For example:

In the elementary classroom and beyond, learning is also made contextual by physically going out to explore the place where the subject at hand is occurring. For a theme on entrepreneurship, for example, students may be encouraged to go out and speak with local business owners.

It is understood that learning is improved when new knowledge is connected with what we already know. Placing learning in a specific context is one way to facilitate that.

In a simple study, 10-year-old children were taught the basics of the LOGO graphics program language. One group was taught in an abstract context, where children had to move the cursor between five circles, touching each one. Other groups were taught in a meaningful context — they had to carry out the same task, though the circles were described as islands with treasure that must be collected at each one, for example.

Children who learned the language in a meaningful context, as opposed to an abstract one, better learned the programming language, and also reported to have better enjoyed the learning process. These children also showed a better mastery of following a series a steps towards the end of executing a plan — a skill set important to computer programming. Even further, and perhaps most importantly, two weeks later these children performed better on a geometry test of the underlying concepts and skills (*Papert, 1980; *Parker & Lepper 1992).

Through observation, Montessori described optimal adult-child interactions before there was a body of research on the topic. In few words, she outlined that adults are to set clear limits but allow children to operate freely within those limits, and to respond sensitively to children’s needs while maintaining high expectations.

One study found that children of authoritative/democratic parents (i.e. parents who are warm, make suggestions rather than demands, and expect maturity) were more well-liked by their peers, and were judged as more prosocial by their teachers. On the other hand, children of  authoritarian/restrictive parents (i.e., parents who often prohibit, assert themselves, and provide directives) were viewed as less helpful by teachers and peers, and were often more disliked by their peers (*Dekovic & Jensen, 1992).

Another study also found that for two-year-olds, parents’ directiveness was positively associated with measures of cognition. As children grew older than two, however, parents’ directiveness was found to associate with lower levels of cognitive functioning (*Landry, et al., 2000). These findings suggest that adults must be sensitive to the degree to which children need direction and guidance. While it may be necessary, too much can hamper cognition.

When I first learned of the degree to which the Montessori classroom was ordered and structured, admittedly, it struck me as strange. Learning must be messy, I thought. Now, having spent plenty of time in a Montessori classroom, I see that the meticulous organization of the materials and shelves, and the purposefully structured progression of the materials, help children learn.

The research currently available agrees with this notion. Studies have found, for example, that items to be memorized are better retained when presented in an organized and structured way, rather than at random (*Bower, Clark, Lesgold, & Winzenz, 1969). As a (perhaps overly) simple example, it is much easier for us, as adults, to memorize “A B C D E F G H I J K” than it is to memorize “D F J C I A H E G K B,” even though the contents of both lists are the same.

In the same way, when new information is presented to children in an organized way, they are better able to make sense of it. The manner in which information and materials are presented matters.

Studies have also found that orderly home environments are associated with better cognitive functioning, while less organized homes are associated with lower levels of cognition, language use, more difficult temperaments, and lower motivation to solve problems or master tasks (*Wachs, 2000). Bear in mind that these are associations, not causations.

The Montessori Approach in Real Life

As I have seen through my own experience, and as Montessori set out to do with her method over a century ago, this approach to education has the potential to develop self-motivated, well-regulated, prosocial learners who take ownership of their own education.

Old two- and young three-year-olds have entered our classroom at the beginning of the year with little to no focus, just bouncing around the room, going from one thing to the next. One parent even described his young child to me as a “threenager.”

By the end of the year, this very same child is able to choose, out of a room full of activities, the one that she wants to do. She very carefully picks it up and, walking around other people and their work, she carries it to an open desk. She uses the work for as long as she desires, and with great focus. When she’s done, she cleans up her work, stands up, pushes in her chair, and carries the work back to shelf from where she got it; both the spot where she did her work and the work itself are both ready for the next person to use.

This work cycle enables the child to build focus, order, concentration, coordination, and independence. Beyond these higher-order cognitive functions, these activities also encourage the development of skills necessary for everyday living, like fine motor skills and hand strength.

By the time this child turns four, a tremendous foundation has been laid for learning. Not only are children ready for more challenging work, they ask for it. One of my four-year-olds, after working very hard on learning letter sounds and writing them out over this past year, recently began reading consonant-vowel-consonant words (cat, hop, etc.). She wrote a list of the first words that she read, and upon reading me this list, she danced around with excitement. This is a child who has ownership of and loves learning.

By the time many children finish their third year at the primary level in our classroom, they are reading books. As someone who didn’t begin reading until second grade, I can unabashedly say that I am jealous. Bear in mind that this did not come at some great expense either; the students aren’t burnt out– just the opposite is true.

While above I mostly mention the literacy curriculum, I’m also envious of my students’ ability to add, subtract, (and sometimes) multiply and divide. They also walk away with other pieces of explicit knowledge, like, for example, the names of the continents of the world, the names of plant and animal parts, and the names of many 2D and 3D shapes (do you know the difference between an ellipsoid and an ovoid?!).

Even further, these children have a strong set of social/emotional skills. They, for example, are encouraged to consider the needs of others, and also to express their own needs. Students are also made aware of our school community’s collective needs, and most are eager to contribute via preparing food, rearranging the room for different activities, organizing the materials on the shelves, cleaning up after a meal, etc.

Montessori’s methods highlight basic truths about human learning. Through observation, she realized that early childhood presents a time of unique cognitive malleability, and that this can be leveraged through interactions the child has with the environment. Scientific support for her methods continues to come to light even in present day, over a century later.

Through quality implementation of the Montessori method, children become engaged and excited about learning. They develop into independent learners who seek out challenges. Even further, this approach can develop students who are as engaged in their learning and as they are in their community, and it’s a beautiful thing.

*References marked with an asterisk are cited in Lillard, 2005.

One Response to Montessori: The New Science behind the Century-Old Methodology (part II)

PREVIOUS
Out with the Old…