Question: What’s the most potentially misleading kind of research?

Answer: Research that supports a position you REALLY want to believe.

For this reason, I try to be ferociously skeptical of research that sounds really wonderful to me. 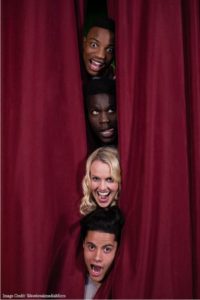 In this case: I’ve been a theater guy my whole life. I acted in plays throughout high school and college. My first teaching job was as a theater director. As I write this post, I’m about to go to a play.

For that very reason, I try as hard as I can to find flaws in the study’s method.

Here’s what I found…

Researcher Jay Greene and his team chose some high school classes at random to attend live plays, including Twelfth Night and Peter and the Starcatcher. They compared those classes to control group classes, and measured several variables:

Tolerance: how did students respond to statements like “people who disagree with my point of view bother me,” or “I think people can have different opinions about the same thing.”

“Social perspective taking”: how did they respond to questions like “How often do you try to figure out what motivates others to behave as they do?”

Content Knowledge: how well did they learn the play’s plot and vocabulary.

As best I can tell, the researchers made a good-faith effort to make comparisons as fair as possible.

In one case, for example, they sent two classes on the same bus to a college campus. Half the students got off the bus to see a live play, and the others went into the same building to see a movie version of that play.

It’s hard to imagine a fairer control group when measuring the effect of live theater.

Students filled out their questionnaires several weeks after they did (or didn’t) see the plays.

When they crunched the data, Greene’s team found impressive differences.

On all of these scales, students who saw live theater scored higher than those who didn’t. And, watching a movie version of the play that others saw didn’t have that effect. In fact, it didn’t have any effect.

To put that in other words:

Students who saw live theater were likelier to be open to other points of view.

They were likelier to think about another person’s perspective.

They were likelier to understand the events and the language of the play.

The stats methodology gets into the weeds here — they report their findings based on standard deviations and z scores — but the trend is clear: live theater matters. A lot.

I’m trying to be grimly skeptical here. But I have to say, I just might be convinced.

Given Greene’s conspicuous fairness, his obvious attempts to be as reasonable as possible, his honesty about the potential flaws in his method, it seems just possible that he’s on to something here.

One important point: this is the first study that looks directly at this question. We can never reach firm conclusions based on only one study.

But: as a place to start, this research seems quite persuasive.

Not only we theater people, but all teachers might come to believe that attending live theater helps students learn…and be good people.

NEXT
Using and Misusing Averages: The Benefits of Music...