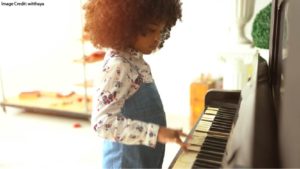 Consider top performers in a given field: inventors, artists, athletes, academics, and so forth.

Presumably, their elite performance results from some mysterious combination of innate ability and effortful practice.

But which of those two variables matters more, the ability or the practice?

And — here’s a super interesting question — does my answer to that explicit question line up with the implicit value judgments that I make in real life?

In other words: I might say I prefer ability (or practice), but end up valuing the practice (or ability).

Tsay and Banaji gave professional musicians brief bios of two pianists. One bio emphasized the all the hard work that the pianist had put into her growth as a musician. (In the researchers’ language, she was a “striver.”)

The other bio emphasized the innate ability that the pianist had. (She was a “natural.”)

The expert musicians then heard brief excerpts of recordings of these two musicians. They rated the performances on various scales, including their “musical achievement,” and whether or not they would like to hear the performance again.

Finally, they answered questions asking them directly whether they valued “effortful training” or “natural talent.”

What did the researchers learn from all these questions and evaluations?

In other words: they were of identical musical achievement. And, we would predict that the expert evaluators would be equally eager to hear these two performances again — because they were the same performance.

When asked explicitly, the evaluators said they valued practice more than talent. (The d value here is 0.57, which is noteworthy.) So, presumably, given this set of circumstances, they might prefer the performance by the striver.

They preferred the natural. (The d value here is 0.79. That’s really big.)

So, even though the performances were equally accomplished, and the evaluators said they valued effort, their evaluations suggest that they actually valued talent.

First: we shouldn’t panic. This is one study looking at a specific evaluation of a specific kind of expert performance. Yes: Tsay and Banaji did all the responsible things to test their hypothesis in different ways — I haven’t summarized two related experiments they did.

But: before we extrapolate too zealously, we should be curious about other research into this question.

Second: Specifically, I wonder how much this preference for “naturals” over “strivers” has a cultural influence. This research was done in an American cultural context. Are Americans unusually keen on talent over effort? What do we find when we look within other cultural norms?

Third: Even with these caveats, I myself will be even more skeptical about my ability to judge between talent and effort objectively. I’m sure that, if you ask me, I’ll tell you I value the effort. But, this research suggest I’ll make decisions based on my appreciation of your talent.

To take a provocative example: when I talk with people who manage “Gifted and Talented” programs, I often hear they value hard work as much as “gifts and talents.” In the future, I will encourage people with those (laudable) values to look under the hood.

Do they have systems in place to measure hard work? Do those measurements, in fact, influence program decisions? Do they — more specifically — benefit people who truly work harder?

In sum: if we in fact value striving, then we should be sure we reward striving — even though it might not feel natural to do so.