Irresistible: The Rise of Addictive Technology and the Business of Keeping Us Hooked by Adam Alter 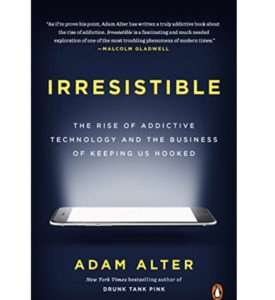 Where is your mobile phone right now?  How much time have you spent on it today? Could you stand to be without it? In Irresistible: The Rise of Addictive Technology and the Business of Keeping Us Hooked, Adam Alter, New York University Stern School of Business associate professor and New York Times bestselling author, discusses the large and increasing rate of behavioral addictions (especially to technology). He examines why behaviors become addictive and what we can do to reduce addiction. About half of the population in the developed world is addicted to something, and for the majority of these people it is a behavior. These addictions stop people from engaging with important and healthy activities. However, because they are largely produced by environmental circumstances, we can change our environments to curb these addictions. Irresistible is an informative read for educators and parents who are worried about young people who are unable to put down their phones or video games, and for people who themselves may be part of the pandemic of behavioral addiction.

Behaviors become addictive when they involve small, concrete, quantifiable goals that are slightly beyond reach, increasing task-difficulty, and positive feedback that occurs in unpredictable increments. Noticing improvements in performance, wishing to resolve something that is unresolved, and engaging in social comparisons can also make a behavior addictive. Many modern online games, social media websites, and even email have these elements to them.  Addiction is being deeply attached to these experiences, even though the rewards are out-weighed by long-term damage.  Addictions are different from obsessions or compulsions in that addictions are pleasurable to pursue, whereas obsessions and compulsions are unpleasant not to pursue. Eventually people with an addiction may come to dislike the substance or behavior they are addicted to because of the adverse consequences it has on their life, but they may still want or crave the substance or behavior. The dopaminergic system in the brain is involved in this feeling of wanting.

While the American Psychological Association recognizes that it is not only substances that can be addictive, it still has not officially recognized some addictions such as to exercise, love, or smartphones.  Further, some people oppose the idea that behaviors can be addictive or that if close to half the population suffers from addiction, it can really be an illness. Alter shows that each of these ideas is false and argues that under certain conditions any of us could become addicts.

The adage “an ounce of prevention is worth a pound of cure” applies to behavioral addiction.  The best way to stem the rising tide of addiction is to stop addictions from forming.  Parents should limit their kids, especially young kids, screen time. They should attempt to draw connections between the content on-screen and experiences in the child’s life.  These steps may stem the media-induced decline in children’s ability to read emotions, interact with others, and develop robust attentional and memory abilities.

For people who are already addicted, they must first realize that their addiction is a problem. Cognitive behavioral therapy and motivational interviewing can help make an individual aware of the costs and benefits of his/her addictive behavior, so that the individual can decide for himself that he is motivated to change. The riskiest environment for addicts is one with cues that remind them of the link between certain behaviors and desirable outcomes. The riskiest time in an addict’s recovery is when things are going well for the first time after hitting rock-bottom.  Will-power alone is unlikely to be enough to break an addiction. Instead, understanding why the addiction was rewarding and addressing that, or replacing it with a healthier alternative is more likely to be effective.  Redesigning one’s environment to limit access to temptations, blunting the extent to which unavoidable temptations are tempting, or instituting systems of punishment when one engages in a bad habit, can be effective.  We are all more likely to act in desirable ways if doing so is fun and easy.  Gamification, in which an experience is turned into a game so that the experience in and of itself is rewarding, can be an effective way to promote learning and engagement with other desirable behaviors.

Alter, A. (2017). Irresistible: The rise of addictive technology and the business of keeping us hooked. New York, NY: Penguin.

PREVIOUS
Can Teachers Be Trusted to Evaluate Research?

NEXT
Praising Researchers, Despite Our Disagreements