The Neuroscience of Intelligence by Richard Haier 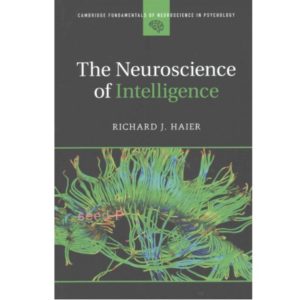 Haier explains that intelligence is a general mental ability. Individuals vary in their ability to learn, remember, and deduce. This variability is measureable to assess intelligence. The common factor governing performance on all tests of mental ability is called “g,” the general factor of intelligence. IQ, measured with tests like the Raven’s Advanced Progressive Matrix, is different from g, but often used as a reliable proxy for it. Haier emphasizes that one of the shortcomings with IQ scores is that they are intelligible only relative to other people. They are not scored on a ratio scale with a true zero value. Nonetheless, IQ scores, Haier claims, are unbiased and do predict academic and life success. He reviews several studies suggesting that IQ measured early in life can predict success, longevity, happiness, and health much later in life. As such, in considering changes to the educational system, he argues that we need to consider the real limits IQ exerts on the ability of some individuals to achieve.

Early research into the brain-basis of intelligence provided evidence for the idea that brain efficiency, rather than overall brain activity, is related to intelligence. It also provided evidence for the idea that not all brains perform the same functions in the same way. While anatomically it is difficult to distinguish between brains from high and low IQ people, there are observable differences in brain functioning and connectivity related to IQ. For example, the thickness of the corpus callosum (which connects the two brain hemispheres) is related to IQ, and the density and organization of white matter tracts in the frontal and parietal lobes of the brain differ as a function of IQ. Haier and his colleague developed the parieto-frontal integration theory of intelligence, which suggests that the integration of and communication between certain frontal and parietal areas is especially important for intelligence. Recent brain imaging studies have added evidence that supports this theory. Haier reports that scientists are working towards identifying neuromarkers of intelligence as unique as our fingerprints that may lead to more personalized educational programs.

Wading into some of the most controversial and important work related to intelligence, Haier argues that “poverty and near-poverty for [low IQ people] is a condition that may have some roots in the neurobiology of intelligence beyond anyone’s control.” That is, genetic determinants of intelligence may partially explain why some people live in poverty. Although this seems concerning, Haier argues that there is reason for optimism because we may be able to treat “neuro-poverty.” He argues that because intelligence is rooted in genetics, and thus subject to limited control, it is wrong for society to avoid protecting individuals from the consequences of their cognitive weaknesses.

As a careful scientist, Haier reminds his readers repeatedly that the brain is complex, no one study of the brain is definitive, and it takes time for truth to emerge from a body of literature about the brain. He has carefully synthesized and analyzed what he sees as the truth in that body of literature. With enthusiasm he urges young scientists to continue to pursue vigorously the study of intelligence, as we may be on the precipitous of great advances in the field.

NEXT
The Mindset Controversy: Is It Time to Give Up?