“How You Got to Be So Smart”: The Evolution of our Brains

When did learning first begin? 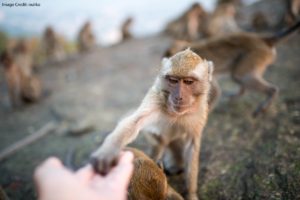 For me, individually, you might say it began when I first attended preschool. But, truthfully, learning began well before then.

I learned how to walk and speak, and to do (a very few of) the things my parents told me to do.

In the womb, I even learned to recognize sounds – like my mother’s voice.

But, let’s go much further back.

When did our species start learning? Or, before then, great apes? Or, even earlier, mammals?

How about those little one-celled organisms that developed when life began, over 3.5 billion years ago? Did they do anything we could meaningfully call “learning”?

Paul Howard-Jones answers that question with a resounding yes. And, most intriguingly, the biological mechanisms that allowed them to learn still help us to do so…all these billions of years later.

As Howard-Jones writes, learning “changes not just our mental world but also our biological form.” The basic biological and chemical mechanisms necessary for the earliest kinds of learning still help us learn today.

Let’s start with E. coli. This single cellular organism has a bad rep, but we’ve got lots of very useful E. coli in our guts. And, they can – in a manner of speaking – learn.

To accomplish this goal, E coli need to “remember” how much nutrition they were getting a few seconds ago, and compare that level to the current intake. Remembering, of course, is a kind of learning.

Howard-Jones helpfully describes the cellular mechanism that allows this memory comparison to happen. It’s a little complicated: think “methyl groups” and “receptors.” But, this clever and efficient system allows cells to remember, and thereby to eat and flourish. (Check out pages 24-5 for a full version of this story.)

Learning gets even cooler from there.

As evolution brought single-cellular organisms together into eukaryotes – from which sprang reptiles and amphibians and mammals and you – it produced ever-more-intricate systems for learning.

For instance, neurons evolved to ensure that multi-cellular organisms could coordinate their movements. (If each cell did its own thing, then we’d get no benefits from having all those cells.)

And, of course, neurons now form the biological basis of learning that happens in our brains.

As evolution led to the development of more-and-more complex organisms, so too it produced increasingly complex kinds of learning: the ability to organize information by association, for example, or to recall something that happened yesterday.

The Evolution of the Learning Brain, devotes considerable time to primate development. In particular, it asks this question: since most evolutionary developments favor specialization, why did our species prove so successful? After all, our brains allow for great cognitive flexibility – the ability to be generalists, not specialists.

Howard-Jones answers this question by looking at the extraordinary climatic and geological upheaval at the time of our evolution.

The story gets even more complicated when we look at chimpanzee dominance networks.

At the same time, later primates developed basic “theory of mind”: the ability to think about what others are thinking.

In one astonishing study, chimpanzees preferred to steal back food when researchers weren’t present – or when the container from which they stole the food was opaque. That is, chimps can think about what others can see, and behave accordingly.

All this complexity – social intelligence, theory of mind – proved especially important during the opening of the Great Rift in Africa: geological changes that led to rapidly changing climate and terrain. In this unusual set of circumstances, a species (like, say, Homo sapiens) with extra cognitive complexity was in a better position to manage upheavals.

The unique geology of the Rift Valley …is thought to have produced extreme climate variability with cycles lasting 400,000 or 800,000 years. […]

This inconsistent environment provided a novel genetic testing ground in which different hominin species were pursuing different approaches to survival, including generalizing vs. specializing. […]

Rather than evolving to fit one change, [Homo sapiens] evolved greater ability to respond to change itself.

How should this understanding of evolution and learning shape our classroom practice?

Howard-Jones remains helpfully modest in answering this question. As he writes:

Evolution cannot tell us how to teach and learn, but it can help us frame and understand this research.

In his closing chapters, therefore, Howard-Jones encourages us to think about teaching with this perspective.

He suggests several insights about a) engagement, b) building of knowledge, and c) consolidation of learning that have evolutionary and neuro-biological grounding.

For instance: engagement. How can we help students pay attention?

Teachers have long known that novelty helps students focus. (Evolution helps explain why. Anything new could be a threat. Or, it could be food!)

Howard-Jones points out that shared attention is itself motivating:

Our strong motivation to share attention is a uniquely human characteristic that may have played a key role in our ancient cultural accumulation of knowledge, as it does today. When self-initiated, this capturing of shared attention also leads to reward-related brain activation.

He also explains why numbers and reading – more cultural practices than evolved cognitive capabilities – prove an enduring challenge to our students.

Howard-Jones brings together many disciplines and a few billion years of history to tell this story.

Some readers might wish for more immediate, concrete teaching strategies. Some specialists, no doubt, disagree with his interpretation of the evidence.

I recommend this book so highly not because it tells us to do particular things, but because it helps us think in new and fresh ways about the work we have to do.

If we understand the evolutionary and neuro-biological sources of our difficulties and our enormous potential, we can think more realistically about avenues of success in schools.