Healthy Snacks After Exercise? Depends on the Timing…

If you saw Roy Baumeister at the 2015 Learning and the Brain conference in Boston, you remember his presentation on self-control. 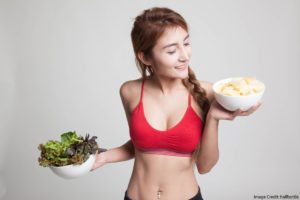 Of course, teachers care A LOT about self-control.

We need our students to control their behavior. (“Do not use the bunsen burner to light your backpack on fire,” my 6th grade science teacher said to me. Often.)

And, we need them to control their cognitive processes. (“When balancing chemical equations, start by identifying the elements.”)

Baumeister found, among other fascinating things, that both kinds of self-control “drain the same reservoir.”

That is: if I use up some self-control resisting the temptation to climb the jungle gym, I have less self-control left over to process the steps involved in subtracting two-digit numbers. (Baumeister’s book Willpower, written with John Tierney, explains his research in helpful detail.)

As the field of psychology wrestles with the “replication crisis,” Baumeister’s conclusions have come under question.

Some researchers haven’t gotten the same results when they run self-control experiments. Some question the research field in general. (For instance: terms like “self-control” are notoriously hard to define.)

This question matters to us. If Baumeister’s theories don’t hold water, then it’s unlikely the self-control solutions he proposes will help very much.

So, to take only the most recent example, John Medina’s Attack of the Teenage Brain devotes several chapters to helping adolescents develop executive functions — such as self-control.

If the research that Medina cites can’t be trusted…we might be back to square one.

I’ve just found some pertinent research in an unlikely field: exercise and nutrition.

Researcher Christopher Gustafson and Co. asked visitors at a local gym to wear an accelerometer, purportedly so they could “keep track of relevant exercise data.” As a reward for participating, they were given a free snack after their workout.

In fact, the “accelerometer data” story masked the real interest of the study: participants’ snack choice.

All participants chose between a brownie and an apple. Some got the choice before they exercised; some after. Did the timing of the choice matter?

If Baumeister’s theory holds up, we would expect a difference between these two groups. Here’s why…

Because apples are a healthier snack than brownies, we know we ought to choose them. But, for most of us, brownies taste a lot better. And so, we must use self-control to make that choice.

Likewise, we know that exercise is good for us. But, we rarely want to do it — and so that choice also takes self-control.

If I make the snack choice before exercise, my self-control reservoir remains relatively full. As a result, I’m likelier to make the “right” choice.

But, if I select my snack as I towel off after exercise, I’ve probably drained that reservoir considerably. So, I’ve got less willpower left. And I’m likelier to give into chocolatey temptation.

Is that what Gustafson found? Indeed he did.

In fact, 17% fewer people chose the apple, and 6% more chose the brownie. (The rest turned down a snack altogether.)

In other words: this study supports Baumeister, and gives us increased confidence in the research suggestions that flow from it.

What are some of those suggestions? You can start with an intriguing one here.