Can a Quick Bicycle Ride Help You Learn Better? 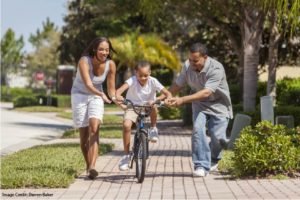 That fascinating question has inspired a lot of research. The answer you get often depends quite specifically on the kind of exercise, and the kind of memory, that you study.

For example, a recent study asks this question:

If you exercise after you learn a new motor skill, do you remember that new skill better?

More specifically, if you ride a bike for 20 minutes, does that help?

(The new motor skill is a little tricky to describe. Basically, you use a joystick to make your cursor follow an irregularly moving line.)

Marc Roig and colleagues had 18-35 years do just that. One group rode a stationary bike for 20 minutes before they learned the joystick task. Another group exercised after. And the control group rested quietly for 20 minutes.

What difference did that make?

(Many researchers retest participants after an hour or two. That time gap is interesting, but it hardly feels like learning…)

Sure enough: after 7 days, participants who exercised — either before or after — did better on the task than those who didn’t exercise at all.

So: we’ve got good reason to think that aerobic exercise after learning a motor skill helps you remember that new skill.

As noted at the top of this post: the answer to the “exercise and memory” question depends on the specific exercise, and the specific kind of memory.

This study looked narrowly at a visuo-motor task.

We would like to say: “Hey! Let’s have students do jumping jacks after they learn a new geometry theorem. After all: exercise helps learning!”

Unfortunately, we don’t have consistent research showing that exercise directly improves this kind of academic learning.

For example, in one of my favorite studies, Steven Most & Co. found contradictory results when they tested declarative learning and exercise. In his 4 studies: half of the time, that exercise benefited women but not men. Half of the time, it didn’t benefit either women or men.

(I like this study so much because Most and his team are so scrupulous in making their contradictory results clear.)

At the same time, we should remember: brains are a part of the body. We’ve got LOTS of research showing that the habit of exercise is good for the brain, and helps students learn.

If you’re especially interested in this topic, I recommend John Ratey’s book Spark: The Revolutionary New Science of Exercise and the Brain. (It’s not so revolutionary or new anymore, but it’s an easy and persuasive read.)

PREVIOUS
Your Brain Headlines of the Week

NEXT
Problems in Science Communication, Part II: Too Li...