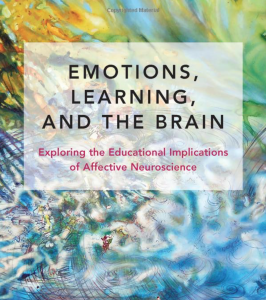 Educators have long known that students’ emotional experiences greatly impact their learning. Dr. Mary Helen Immordino-Yang offers a neurobiological account of why this may be the case. In Emotions, Learning, and the Brain: Exploring the Educational Implications of Affective Neuroscience, Immordino-Yang explains in a series of essays that the brain constructs complex emotional experiences that help us learn, socialize, and act morally by coopting the same brain regions that help us regulate our viscera and basic survival-related mechanisms. She argues that, contrary to centuries old theory that emotions interfere with rational thinking, our “emotional rudders” steer our rational actions and ability to learn. Learning occur through a complex interplay of our biological beings, psychological selves, and cultural contexts.

Immordino-Yang is uniquely positioned to offer insights from affective neuroscience for education because of her interdisciplinary background and experiences; she was a junior high school science teacher and currently is a human development and affective neuroscience researcher, an associate professor of education, psychology, and neuroscience at the University of Southern California, and the rising president of the International Mind Brain and Education Society. She encourages educators to join with her in a critical conversation about how to build bridges between an understanding of the complex process of students’ learning and feelings in real-world classroom settings and the lab-based neuroscientific research about the brain’s construction of emotion.

Immordino-Yang argues then that our ability to learn is contingent upon our ability to feel emotions. For example, individuals who suffered brain damage in a part of the frontal lobe that impacted their social and emotional behavior (but not IQ) were subsequently unable to develop intuitions in new learning situations to guide rational thought or action. Students benefit when emotions, such as interest and inspiration, are harnessed in the classroom and when educators respect students’ emotional intuitions. It is not surprising that these social emotional experiences matter so deeply for learning and creativity when we consider that our ability to feel these emotions is evolutionarily entwined with our ability to regulate our basic life-supporting physiological functioning (e.g., breathing).

In an fMRI experiment Immordino-Yang found that feeling admiration or compassion for other people activated brain networks associated with inwardly-directed thoughts rather than thoughts about the outside world. As such, she constructs a compelling argument that supporting students in developing their ability to reason complexly about the future and about social, emotional, and moral quandaries may necessitate giving students time to reflect and direct their thoughts inward.

Immordino-Yang offers a fascinating case-study about the affective skill, emotional prosody, and general functioning of two boys—Nico and Brooke—who have each had one hemisphere of their brains removed. These boys are both remarkably successful and even show a good deal of proficiency with tasks typically thought to be governed by the hemisphere that they have lost. For neurologically typical students these boys’ ability suggests the power of capitalizing on one’s unique strengths and the importance of reframing problems such that they are solvable given the skills that one possess. Immordino-Yang suggests also that these boys show that our emotional experiences affect us throughout the learning processes—even in the way we come to gather information when learning. Drawing on her work with Nico and Brooke as well as recent advances in our understanding of the brain’s mirror neuron areas, which maps both one’s own actions and the observation of another’s’ actions, Immordino-Yang argues that our interpretation of actions is culturally situated. Students must understand a teacher’s goals and intentions and develop an appropriate plan for their own actions.

Immordino-Yang concludes with a timely discussion about the way in which social and affective neuroscience can help us understand how to facilitate interactions with digital devices. The more the human-computer interaction is like an authentic social interaction—in which goals are transparent and each party has a role in shaping the exchange—the more satisfied people are likely to be with the design of the technology.

Howard Gardner aptly summarized Immordino-Yang’s strength in the foreword of this fascinating book: “Mary Helen stands out for the way in which she has drawn on the findings and perspectives of [multi-disciplinary] scholars, initiated important lines of research in these areas, brought together her work with those of other innovative scholars into original powerful syntheses, and articulated the educational implications of cutting edge work in psychology, neurology, and other strands of the cognitive sciences.”

PREVIOUS
Why Your Learning Style Isn’t Helping You Learn
NEXT
What One Massive UK Study Says About How to Design...