Phrases like “inquiry learning” or “project-based learning” inspire both enthusiasm and skepticism. 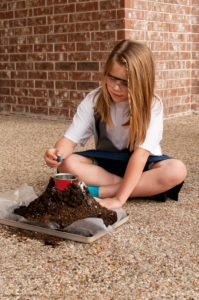 In part, the difference of opinion results from a very basic problem: it’s hard to define either term precisely. What, exactly, are the essential elements of inquiry learning?

If we can’t even answer that question, it will be jolly hard for researchers to know if the method “really works.”

Second: teachers should encourage hands-on learning. As much as possible, students should do the work themselves, not watch the teacher do it.

If you approach education with a constructivist lens, you’re likely to favor both approaches. Students who make sense of ideas on their own — with their own thoughts and their own hands, without too much teacher guidance — are likeliest to think deeply about concepts.

If instead you start with cognitive load theory, you’re likely to worry about these practices. Students have relatively little working memory with which to process new ideas. The absence of teacher guidance, and the need to manipulate physical objects might well overwhelm precious cognitive resources.

What They Did; What They Found

Researchers taught 4th and 5th graders about converting potential energy to kinetic energy. They used balls rolling down ramps of different heights to illustrate these concepts.

In one case, a teacher told the students what to expect: the higher the ramp, the farther the ball will roll. The students then watched the teacher do the experiment. (That is: “direct instruction.”)

In another, the teacher told students what to expect, but let them roll balls down the ramps.

In the third case, the teacher didn’t tell students what to expect, and let them do the experiment. (That is: “inquiry learning.”)

So: which combination of inquiry techniques yielded the most learning?

Direct instruction did. By a fair peg. (Cohen’s d was 0.59: not huge, but certainly respectable.)

In fact, in this paradigm, “inquiry learning” was the least effective at helping students take these concepts on board.

(To be complete: direct instruction helped students a) remember what they learned and b) reason with that new knowledge. On a third measure–applying this new knowledge to real world situations–both approaches worked equally well.)

At least in this one research paradigm, working memory limitations made constructivist pedagogy too difficult.

On The Other Hand…

When I first planned this post, I was excited to contrast Zhang’s study with a dramatic report from Washington State.

According to this report — here’s a one-page summary — 9th- and 10th-grade students who followed a constructivist inquiry curriculum (including hands-on learning) learned four extra months of science over two years.

I was hoping to argue that we should expect contradictory studies, and learn from the tensions between them.

In particular, the difference between a 1-shot study and a 2-year-long study should really get our attention.

In the ramp-and-ball study, Zhang’s three student groups learned under three equally plausible conditions. That is: she compared something to something else.

The Washington study, however, compares something to nothing.

That is: teachers at some schools got a shiny new curriculum and lots of dedicated professional development. Teachers at comparison schools got bupkis.

So, it’s entirely possible that the inquiry curriculum caused the extra learning.

It’s also possible that simply doing something new and exciting enlivened the teachers at the inquiry schools.

Do you have a well-designed inquiry learning study that you love? Please send it to me: [email protected] I’d love to write about it here…