If a picture is worth 1000 words, how many words is drawing a picture worth? 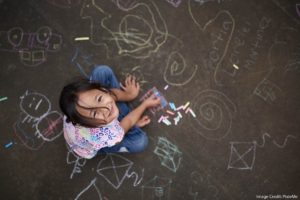 More specifically, Jeffrey Wammes & Co. have been exploring this question: is it true that drawing benefits memory? If I draw a picture of a word, will I remember it better than if I simply wrote that word down several times?

To explore this question, Wammes and his team have run a series of studies over the last several years. Basically, they’re trying to disprove their own hypothesis. If they can’t disprove it…well, it’s increasingly likely to be true.

Which words did they remember better? Yup: the words that they had drawn.

This effect held up not only in a psychology lab, but also in a college lecture hall.

This hypothesis makes a kind of rough-and ready sense, for a number of reasons.

For instance, it just seems plausible that drawing benefits memory because visuals aide memory. Or, because drawing requires a greater degree of cognitive processing than simply writing.

So: perhaps drawing is but one example of these other effects.

Wammes and Co. wanted to see if that’s true. (Remember: they’re trying to disprove their hypothesis.)

So, they repeated the study several more times. In some cases, students drew pictures for some words and looked at pictures of other words.

In every case, they found that drawing produces even greater benefits than each sub-strategy. Students remembered more words that they had drawn than words they had processed in all those other ways.

What should classroom teachers do with this information?

In the first place, keep in mind that we’re still in early days of testing this technique. Much of this research has focused on nouns that are relatively easy to draw: say, “apple.”

At the same time, Wammes ran one study where students either drew or copied verbatim definitions of words. For instance, “stratoscopes” are “airborne telescopes that are mounted on high altitude balloons.” Once again, drawing led to better memory than simple copying.

With these caveats in mind, I think we can plausibly use this approach in our classrooms. If you think a word, definition, concept, or process can plausibly be drawn, give your students a change to “review by drawing.”

Or, if you’ve built in a moment for retrieval practice, encourage students to include a drawing as part of their retrieval.

You might conclude that a particular topic doesn’t lend itself to drawing. An an English teacher, I’m not immediately sure how to draw “ode” or “concatenation” or “litotes.”

But, if a word or concept seems drawable to you, you might give students a chance to try out this mnemonic aide.

I emailed Dr. Wammes with a few questions about his research. In his reply, he included this quite wonderful sentence:

“There certainly will be situations where it [drawing] doesn’t work, I just unfortunately haven’t found them yet.”

Too often, teachers can take research findings as absolute injunctions. When we learn about the 10 minute rule, we think: “okay, I have to change it up every ten minutes!”

But, that’s just not true.

But, almost no research finding always applies. We have to translate and adapt and tinker.

So, when you try this technique in your classroom, keep track of your results. If you pass them on to me, I’ll let the researchers know.

PREVIOUS
The Disordered Mind: What Unusual Brains Tell Us A...