The Disordered Mind: What Unusual Brains Tell Us About Ourselves by Eric R. Kandel 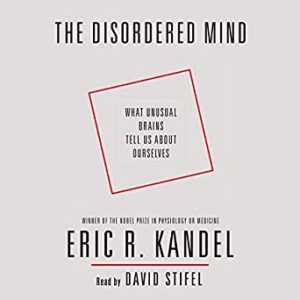 One of the most complex unsolved mysteries in science is how the brain produces consciousness.  The study of brain disorders not only helps us understand and treat those conditions; it also renders insights into questions about human consciousness, sense of self, and creativity.  It can help us appreciate both our individuality and our shared humanity. Eric R. Kandel, Columbia University professor, Howard Hughes Medical Institute senior investigator and Nobel Prize winner in Physiology or Medicine, advances these beliefs in his book The Disordered Mind: What Unusual Brains Tell Us About Ourselves. Kandel, who also authored The Age of Insight, reviews the latest research on autism, depression, anxiety, schizophrenia, addiction, Parkinson’s disease, and Alzheimer’s disease to illuminate the factors that contribute to these diseases, how the diseases are experienced, possible points of intervention, and what these diseases reveal about our social, emotional, decision-making, memory, kinesthetic, and creative abilities more generally.

Kandel commences with a brief overview of the history of psychiatry and neurology and modern tools for studying the brain and disordered behavior. He emphasizes that genes and environment interact to disrupt neural circuitry, resulting in disordered minds.  Brain disorders can be caused by over or under active brain circuits or ineffective communication within the brain because of injury, altered synaptic connections, or developmentally inappropriate patterns of brain connection.

Kandel contends that we are inherently social; typical development cannot proceed in isolation. Yet, autism is a disorder related to difficulty connecting with people and understanding others’ minds. The so called “social brain,” which includes the inferior temporal cortex, amygdala, temporoparietal junction, and other regions, may be disrupted in autism. Autism spectrum disorders, like several other brain disorders, have a strong genetic basis and may come about in part because of age-related mutations in fathers’ sperm.

We are not only social beings but also emotional. Indeed, emotions, or states of readiness in our brain in response to our surroundings, play a critical role in our everyday lives and in our constructions of our sense of self.  One in every three Americans will experience anxiety at least once in their life, and about 8% will experience post-traumatic stress disorder. Depression is a mood disorder that affects about 5% of people and is characterized by feelings of extreme sadness, hopelessness and worthlessness and by a lack of energy.  Although it can be cruelly stereotyped as such, depression is not a personal or moral weakness. Kandel explains how the use of selective serotonin reuptake inhibitors, ketamine, cognitive behavioral theory, and brain stimulation can all be used, under different conditions and in different combinations, to treat depression. These disorders are teaching us about where emotions arise in the brain (i.e., in areas including the hypothalamus, amygdala, striatum, and prefrontal cortex), how the brain and body engage in bidirectional communication, and how emotions impact behavior, decision-making, and morality.

Several brain disorders are caused by dopamine imbalances. Schizophrenia is a neurodevelopmental disorder related to excessive dopamine. It affects 1% of the population by disrupting thinking, behavior, memory, and sense of self starting in late adolescence.  Whereas depression results primarily from functional abnormalities in the brain, schizophrenia results primarily from anatomical abnormalities. Unfortunately, most currently available treatments for schizophrenia address only the symptoms related to disordered thoughts and not the symptoms like lack of motivation. Fortunately, preemptive therapy for people at risk for developing schizophrenia is promising.  Parkinson’s disease, a motor disorder associated with tremors at rest and slow movement, is caused by defective protein folding that causes dopamine producing neurons in the brain’s substantia nigra to die. Addiction is another chronic disease in which dopamine is involved. Medications that help people forget the pleasure of an addictive substance can help treat addiction. Unfortunately, even though drug overdose is a leading cause of death for people under 50, there has been minimal investment in drugs to treat addiction, Kandel laments.

Although memory abilities can be disrupted in several of the disorders Kandel reviews, in dementia memory loss is the primary symptom. Alzheimer’s disease is fundamentally different from age-related memory decline. It is causes by protein misfolding, causing toxic clumps that create neurofibrillary tangles. Our understanding of Alzheimer’s disease, including genetic and health risk factors for developing it, has increased rapidly.

Synthesizing his review of these disorders, Kandel offers insights into our understanding of creativity and consciousness. Creativity has a biological basis in the brain and the capacity for creativity is universal (i.e., not dependent on mental disorders). By reviewing the art of people with various brain disorders Kandel suggests that some of the elements that are important for creativity are perseverance, collaboration, mind-wandering, and combining unrelated elements. As Sigmund Freud argued, unconscious mental work impacts conscious thinking. Disordered minds are revealing that our decisions emerge from our unconscious thoughts, more than from our conscious thoughts.

Kandel concludes with a powerful prediction—that neurology and psychiatry will merge soon into one discipline that examines how genes and environment lead to individual differences in brains and behavior. This field could move us to personalizing medical treatment such that we may be able to prevent the diseases of the brain and mind.

PREVIOUS
Spiders in Budapest: Deeper Understanding of the B...

NEXT
Does Drawing a Simple Picture Benefit Memory?