We’ve got many reasons to believe that technology — whatever its benefits — can distract from learning.

Heck, according to one study, the mere presence of a cellphone reduces available working memory. YIKES. 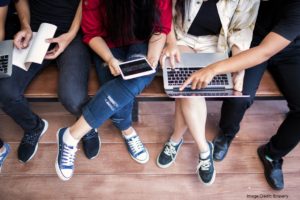 One group of researchers wanted to know: what effect might a technology ban have on the tone of the classroom?

Would such a ban complicate the students’ relationship with the professor?

Would it affect their engagement with the material?

And, of course, would it benefit their learning?

One professor taught four sections of the same Intro to Psychology course. Cellphones and laptops were forbidden from two sections, and allowed in two.

At the end of the course, researchers measured…

Students’ rapport with the professor: for instance, students rated statements like “I want to take other courses from the professor,” or “I dislike my professor’s class.”

Students’ engagement with the class: for instance, “I make sure I study on a regular basis,” or “I stay up on all assigned readings.”

Students’ grades — on 3 exams during the term, and on their overall final grade.

That’s straightforward enough. What did they find?

The Results, Part I: Hang On to your Hat

You might predict that a technology ban would improve class tone. Freed from the distractions of technology, students can directly engage with each other, with their professor, and the material.

You might instead predict that a ban would dampen class tone. When teachers forbid things, after all, students feel less powerful.

Hutcheon, Lian, and Richard found that the tech ban had no effect on the students’ rapport with the professor.

They also found that the ban resulted in lower engagement with the class. That is, on average, students in a tech-free class said they did class readings less often, and put forth less effort.

This finding held true even for students who preferred to take notes by hand: that is, students who wouldn’t be inclined to use laptops in class anyway.

The researchers hypothesized that students in the technology-ban sections would learn more. That is: they’d have higher grades.

That’s an easy hypothesis to offer. Other researchers have found this result consistently (famously, here).

However, Hutcheon and Co. didn’t get that result. There was no statistically significant difference between the two groups.

The difference between a B and a B+ might not be statistically significant…but it sure might feel significant to those who got the B.

What On Earth Is Going On?

The researchers wonder if the tone of their tech ban led to these results. To be honest, when I read the policy on “Technology Use in the Classroom,” I thought it sounded rather harsh. (For example: “Repeated infractions will result in points lost on your final grade.”)

So, perhaps a more genially-worded ban would impede class engagement less, and allow for more learning.

But, that’s just a guess.

For me, the crucial message appears in the authors’ abstract:

“[T]hese results suggest that instructors should consider the composition of students in their course prior to implementing a technology ban in the classroom.”

In other words, technology policies can’t be the same everywhere. We teach different content to different students in different schools. And, we are different kinds of teachers. No one policy will fit everywhere.

To be crystal clear: I’m NOT saying “This study shows that a tech ban produced bad results, and so teachers should never ban technology.”

I AM saying: “This study arrived at helpfully puzzling results that contradict prior research. It therefore highlights the importance of tailoring tech policies to the narrow specifics of each situation.”

As I’ve said before, teachers should follow relevant research. And, we should draw on our best experience and judgment to apply that research to our specific context.

NEXT
Naps In Schools (Just Might) Improve Classroom Lea...