Can Our Evolutionary Past Help Shape Our Classrooms’ Future? 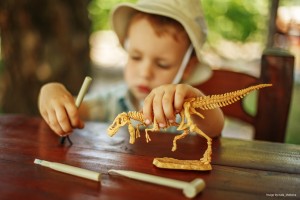 Humans are genetically adapted for learning. The transmission of information, skills, culture, and knowledge from generation to generation has helped us survive and become who we are today. Our journey to becoming modern humans has been shaped primarily because of the change in our environments.

The trouble is, our modern learning (and teaching) environments are not anything like those of our ancestors. Recent research is beginning to present some compelling evidence for implementing evolutionary-influenced practices and policies into our modern education system. In fact, the non-profit think tank I work for has done extensive work in this field, including publishing a textbook, hosting workshops for researchers and educators. We have also helped implement some of these practices in schools in both Florida and New York with great results. In order to design and implement an effective educational environment, we need to understand our evolved abilities to acquire skills and knowledge.

And importantly, some of these ideas have not only been touted by other research fields, but have also been put into practice by some educators. Here are six points that I believe everyone should consider about how our current educational system would look from the perspective of evolutionary theory:

One way many evolutionary scientists can get a glimpse of our ancestral past is by looking at hunter-gatherer societies. What they’ve found is that adults do not control children’s learning, but rather help children learn as they grow – answering their questions and showing them the skills they need to succeed, when they need them. Within these traditional societies, children (and even teenagers) learn through their own self-direction through play and exploration, making it essential for there to be free time for these activities.1, 2

Relative to our lifespans, humans have a longer period of childhood than any other species on the planet. While this prolonged maturing process has its downsides (greater parental investment), it also has its upsides: intelligence.

Our big, complex brains take a lot of time to develop, most of which happens after birth. While I won’t go into the driving factors of this development(which will be featured in a later essay), one thing is for certain: in ancient environments, children would have been very vulnerable because of this prolonged period. Children’s curiosity, playfulness, socialness, and their ability to imitate and learn new skills were extremely valuable for surviving these environments. 3, 4 Children’s prolonged development and innate drive to learn not only helped them survive, but also allowed them to flourish in society, allowing them to learn how to be social, learn and participate in their culture, become innovative, and learn language. This pattern is still evident in hunter-gatherer societies today. 2

While we all know the long term benefits of learning, young people often have a hard time understanding this. Research has shown that a number of species (from pigeons 5 to monkeys 6, and humans 7) find delayed gratification extremely difficult to hold out for. A great example of this is a very fun study that involved children and marshmallows.

Young children were put a room, one at a time, with nothing but a table, chair, and a big, fluffy marshmallow on a plate. The kids were told that they could eat the marshmallow now if they’d like or–if they could wait until the researcher came back (approximately 15 minutes)– they would be given two marshmallows. Needless to say, quite a few kids ate the single marshmallow.

One way to address this struggle with self-control is by allowing children to play and explore more. When children participate in self-motivated play and explorations, the benefits often lie in the discoveries made, the excitement of the activity itself, feedback from others participating, and the immediate gratification of learning something new, while having fun doing it.  While sitting quietly in a classroom and listening to a conventional teaching lesson may allow children to learn the same things, they don’t realize that their good behavior and full attention will result in a better education.

Before “grade” defined schools, children rarely were segregated by age. In modern hunter-gatherer and traditional societies, learning occurs in mixed age groups. In fact, this was an active model of learning environments as recently as the 19th century.

As every teacher knows, we often learn more by teaching than by being taught, especially when our students challenge us.  And research within the social sciences backs up this claim.8 While mixed-aged classrooms may be quite challenging to implement within our current school systems, not only because of the strain on the teachers but also because of constraining curriculum standards, they are something to consider for the future and for other less restrictive situations, like after school programs.

Species are adapted to their long-term past environments, and so prior adaptations sometimes go awry. In other words: humans function in today’s world with evolutionary adaptations better fitted to habitats that are thousands of years old. Many of the problems that schools and children experience today may be unintended consequences of educational environments that are significantly different from ancestral conditions.

One example is physical activity. Physical activity and movement were a central part of the ancestral environment; however, in current learning environments, children are forced to sit still for extended periods of time. In fact, this deprivation of movement, along with other things like physical touch, greatly hamper children’s development. 9, 2

One of the main things that sets humans apart from many other species is our ability to cooperate and be egalitarian.10 People of all ages and cultures cherish having their voices be heard. Children are no different – they are often the first to resist being told what to do.

While this doesn’t mean that children should be allowed to rule the roost, it does suggest that they should be actively involved in the decision-making process, especially in the environment where they spend a significant amount of their time: school.

One popular real-life example of this is the Sudbury Valley School, in which adults do not control children’s education; rather the children make democratic decisions to educate themselves. The administrative body consists of students and staff members who make decisions together on rules, purchases, staff, and learning courses. The school and model have been working for over 40 years, with graduates going on to pursue careers in everything from science and social work to music.

So, how do we implement this knowledge in (and out of) the classroom?

By understanding our evolved abilities to acquire skills and knowledge, we can design and implement more effective learning environments. While some of the points discussed here may be impossible given the constraints of our current education system, there are some things we can do (or maybe you already do!) that can maximize children’s learning potential. One thing you can do is to teach in ways that maximizes immediate gratification! The most successful teachers are those that make their lessons enjoyable and engaging. Allow kids to interact with each other: be playful, curious, and social.

This suggestion ties into a second important point: let kids move, play, and explore with everyone, at all ages. While this strategy may be trickier depending on your school, collaborating with other teachers in other grades may provide a wonderful learning environment for your children to learn in (and learn from). These points don’t have to just take place inside of the classroom; rather they can be applied to all kinds of environments: be they playgrounds, neighborhoods, youth centers, or daycares.

Viewing the learning environment through an evolutionary lens provides us with a deeper understanding of how individuals learn and teach, especially in educational settings. Given what we’ve learned about our brain’s evolution and children’s development, it seems that educational practices need to evolve as well.

PREVIOUS
The World’s Obsession With Plastic May Damage De...

NEXT
Parent-Child Interactions: Forming Beliefs About I...