Against Empathy: The Case for Rational Compassion by Paul Bloom 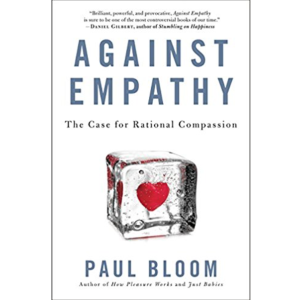 “Empathy can motivate kindness to individuals that makes the world better.” Paul Bloom, the Brooks and Suzanne Ragen Professor of Psychology at Yale University, asserts this emphatically. Yet, Bloom makes a compelling case for reducing our reliance on empathy in order to achieve fairness and kindness. Bloom’s Against Empathy: The Case for Rational Compassion will be of interest to those seeking to develop their own moral muscles and to those interested in helping others cultivate the social emotional skills they need to foster a kinder world. Bloom argues that empathy, or feeling or experiencing what another person feels or experiences, on the whole makes us less caring and just, and more parochial, short-sighted, and insensitive to the scope of human suffering. Deliberative decision-making is the best path forward for cultivating a more compassionate world.

Bloom is clear to state that he is not against goodness and kindness. In fact, he is interested in bringing about more of these qualities through less empathy. He argues that like a spotlight directing our visual attention to one area at the near exclusion of others, empathy directs our emotional attention to an issue while reducing our ability to discern who needs help the most and what the consequences of our attempts to help may be. Our empathic capacities are limited; we can only empathize with a few people at a time, and we are more likely to empathize with those similar to us. Too much empathy can paralyze one from acting to change the circumstances of the object of empathy.

Bloom provides several examples of empathy-motivated actions that were illogical or counter-productive, e.g., after the mass shooting in Newtown, Connecticut, the city received so many toy donations (often from people less affluent than the residents of Newtown) that storing all the toys became burdensome. On a smaller scale, if parents were to feel all the time what their children felt they would be less motivated to get their children to do things that are good for them in the long-run but unpleasant in the short-term, such as receiving medical shots. He argues that understanding what others think or feel can be valuable, but actually experiencing those feelings is rarely beneficial, or at a minimum not as beneficial as being able to demonstrate compassion, self-control, and reason. On a neural level, feeling empathy has been associated with activity in some of the same brain areas as those involved in experiencing a given emotional state for oneself. For example, the anterior insula activates when a person experiences pain and disgust and when the person experiences empathy for another person’s pain and disgust. Although the magnitude of activation is larger for one’s own experience than an empathic experience, Bloom argues that it would be better not to have the empathic experience in the first place.

Individuals vary in their levels of empathic ability, and different circumstances will lead individuals to exercise empathic skills to varying degrees. Regardless of one’s ability or propensity for empathizing, empathy will only make another person’s experience salient; it will not make an individual more moral. For example, people induced to empathize with a sick child were more likely than those not induced to do so to decide to give that child preferential treatment at the expense of sicker children—an unfair decision. Empathy can even motivate violence and cruelty, when for example, a group goes to war to avenge the wrong inflicted upon someone with whom the group empathizes. Empathy is not what motivates our care for others; rather our concern for others stems from an abstract, reasoned recognition that regardless of how we feel about those others, their lives have value. Bloom argues, “it’s only when we escape from empathy and rely instead on the application of rules and principles or a calculation of costs and benefits that we can, to at least some extent, become fair and impartial.”

While this call for rational compassion might promote justice and morality overall, many might suspect that within the context of intimate relationships empathy is still valuable. Indeed, Bloom acknowledges that before he was completely “against empathy”, he believed it had value in one-on-one relationships. Now, however, he argues that even in intimate relationships empathy is not beneficial. If one has too much of it, one can get overly involved in the lives of his loved ones, which ultimately hurts both parties and damages the relationship. Compassion, not empathy, makes us better partners, parents, and friends.

All in all, Bloom concludes that the negatives of empathy outweigh its positives and that while reason is not sufficient for being a good and moral person, in general, the more reasoned, rational, and self-regulated one is the better.