Seriously: What Motivates Teachers to Be Funny?

To start 2021 in the right spirit, let’s think about humor in the classroom. 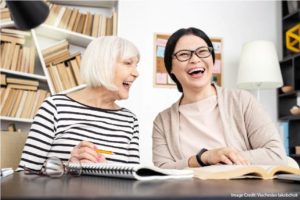 It seems that, obviously, humor might be a good classroom strategy. When the lesson slows down, a joke or two might brighten the mood.

Once we begin studying this question the way researchers study things, well, it gets much more complicated. (I once heard the claim that “laughter improves learning 44%!” Unsurprisingly, so vague a statement doesn’t hold up to much scrutiny. For starters, the cited research says 28%, not 44%…)

What kind of humor do teachers use?

Are there differences between K-12 teachers’ and college professors’ use of humor?

Are there gender differences in use of humor? (Believe it or not, there’s a controversy here.)

What motivates teachers to attempt humor?

What did the researchers find?

Psychologists often divide behavior up into plausible categories for analysis.

Also, motivations can be either positive or negative.

In this case, a professor might want to demonstrate that they’re good (positive), or not reveal that they’re bad (negative).

Researchers have other motivational categories as well.

In this study, they wonder if professors use humor to improve relationships with students.

And, they wonder if a prof’s desire to avoid work influences their use of humor.

To start answering these questions, the researchers had more than 250 professors fill out surveys that give insight into their motivation. (Important: these data, in other words, come from self report. Not everyone is persuaded by such data.)

They also asked students to rate — on a scale of 1 to 5 — their agreement with this statement: “Instructor enhances presentations with the use of humor.”

So, what did they learn?

For instance: when did students endorse the statement that their professor “enhances presentations with the use of humor?”

Answer: when those professors themselves said s/he wanted to “build amicable and valued relationships with students.” That is: profs with relational goals use humor to build those relationships.

How about the reverse? When did students consistently reject that statement?

Answer: When their professors said they wanted to avoid looking bad. (If you’re keeping score, that’s a “negative performance” goal.)

In brief: professors who want to connect with students make content-related jokes. Those who fear looking incompetent remain humorless.

First: the researchers here are scrupulous to distinguish between college professors and K-12 teachers. They don’t claim that these findings apply to earlier grades.

Second: This research team — contradicting others — finds that women use humor more often than men. (The controversy continues!)

Third: One word in particular jumps out at me: “enhances.” Students didn’t say that the professors “tried” to be funny, but that they “enhanced presentations with humor.”

That is: the students suggest that — for teachers who want to build relationships — humor really does make lectures better. The researchers don’t address that question directly, but — at least to me — that conclusion flows directly from this research.

Oh, what the heck. Let’s have another.

Fourth: In humor as in all things, personality matters. If you’re not a funny teacher, don’t feel that you have to start telling jokes to build relationships. You — almost certainly — have your own ways to do so. Use your own authentic strategies to connect with your students.

I can’t cite research, but I’m almost certain: your own honest self-presentation will be MUCH more effective at building relationships that forced humor.

NEXT
Does Online Learning Work? Framing the Debate to C...