What if a Research-Supported Educational Idea is Unconstitutional?

As a reader of this blog, you know we’ve got lots (and LOTS) of research showing that sleep benefits learning.

What if it turned out that—for some reason—giving students time to nap were unconstitutional? What if lawyers argued we can’t delay high-school start times to allow for more sleep, because the constitution requires school to begin before 8:00 am?

Although this hypothetical example is obviously silly—why would naps be unconstitutional?—the deeper question matters. We are, after all, a country of laws. If a particular educational practice—like, say, “separate but equal”—is unconstitutional, we don’t do it.

The Tricycle is a magazine that promotes Buddhism, and for that reason takes real interest in mindfulness. You can, for instance, read about “The Buddha’s Original Teachings on Mindfulness” here. 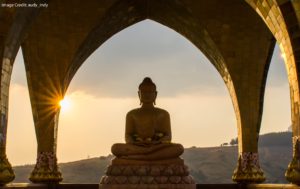 Back in May, Tricycle editor James Shaheen posted a surprising interview on their website.

In this conversation, Shaheen talks with Dr. Candy Gunther Brown: a religious studies professor who argues that mindfulness can’t be separated from its religious origins.

For that reason, requiring mindfulness is—in fact—requiring a kind of religious activity: a requirement that, in Brown’s view, violates the US Constitution.

Shaheen’s conversation with Brown lasts almost an hour, and so can’t be summarized in a brief blog post. I encourage you to listen to the whole thing.

To give a flavor of her argument, I’ll briefly mention a few of her points.

First: mindfulness often encourages participants to adopt a detached view of the events around them, and their emotional responses to those events. Rather than respond, we should “take a mental step back” and simply notice our bodily response to our feelings.

Brown notes that this seemingly “neutral stance” might well spill over into a religious perspective. After all, many religions ask their adherents not to notice their internal responses, but to go into the world and do something about those events.

For that reason, mindfulness isn’t a religiously neutral practice.

Second: Brown quotes research suggesting that people who practice mindfulness have religious experiences at a higher rate than those who don’t. And, people who have those often end up moving away from a monotheistic perspective.

Which is to say, mindfulness might in fact change the religious views of the people participating in it.

If we know that to be true (and, to be clear, I haven’t reviewed the research Brown cites), then requiring students to practice mindfulness might both have all the school and health benefits we like and indirectly encourage a particular religious framework within schools.

Of course, Brown discusses other concerns as well. Some are explicitly legal. Others focus on the motives of (some) people and organizations that promote mindfulness: phrases like “stealth Buddhism” make her suspicions amply clear.

You can read her own summary of her argument here.

What Should We Do?

Brown doesn’t want to banish or forbid mindful practices from schools. Instead, she wants schools that have them ensure such programs are voluntary.

They should not even be “opt-out” programs that students must decline—risking their relationships with peers and teachers.

Instead, they should be “opt-in” programs that students sign up for and attend when they choose to.

In her view, this framework—especially if it offers appropriate alternatives—would both provide the good stuff that mindfulness allows and pass constitutional muster.

Another important point stands out in this debate.

So, the second thing we should do is emulate Shaheen’s example. As I’ve written elsewhere: when we hear about evidence that contradicts our beliefs, we should not ignore it or decry it.

We should, instead, learn as much as we can from it.

Whatever you think about the constitutionality of mindfulness, I hope you admire, and follow, Shaheen’s example.

PREVIOUS
When Introverts Act Like Extraverts (and Vice Vers...