Welcoming Students by Welcoming Their Values

What happens when students have the chance to write about their own values? 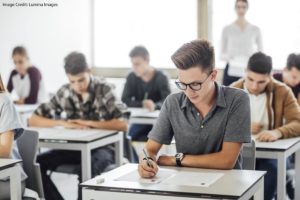 Could an exercise that simple make a difference in school? Could it help especially vulnerable students?

This idea sounds too good to be true, but it has increasing support behind it. The most recent news comes from Great Britain…

Back in the 1990s, Claude Steele and other researchers found that stereotypes led to a complex, counter-intuitive thought process.*

The short version goes like this: students who know they might be stereotyped often want to disprove those stereotypes. Paradoxically, their efforts to do so lead them to adopt counter-productive strategies.

As a result, they do less well than they otherwise might have done — and (tragically) reconfirm to themselves the stereotypes they’ve been trying to defeat.

As researchers explored this phenomenon, they quickly got to work trying to figure out solutions.

Happily, we’ve got lots of strategies to combat stereotype threat.

It turns out that growth mindset interventions have a big effect. For instance, this study by Walton & Cohen still amazes me.

A less well-known approach follows this chain of logic:

If students in my class feel a valued and welcomed member of it, they’ll have less cause to worry about potential stereotypes in the atmosphere.

If that’s true, then anything I can do to promote a feeling of belonging should reduce ST.

Several researchers in the US have tried a simple writing strategy. Students have the opportunity to write about their values system.

In theory, this writing should make them feel more welcome, should reduce the salience of stereotypes, should thereby let more learning happen. (Of course, the theory is more complex, but that’s the gist of it.)

The approach is called values affirmation.

Values affirmation has been tested as an anti-stereotype-threat strategy in the US, and has had good results.  (For instance, here.)

Would it work elsewhere?

Researchers in Great Britain asked that question, because stereotypes depend so much on local context.

For instance: academic stereotypes in the United States focus largely on race and gender. Unsurprisingly, most US research focuses on those two topics.

In Great Britain, stereotypes about social class prove much more damaging. So, Ian Hadden and others wanted to know if values affirmation counteracts stereotype threat based on social class (as well as ST based on race and gender).

Details of the Study

One control group wrote about their morning routine.

A second control group wrote about

The experimental group wrote about

“values that are the most important things for you personally, and why these things are important for you.”

In earlier studies, for example, people wrote about friendships, or service to others, or their religious faith.

As predicted, these values affirmation prompts neither helped nor hurt the students from relatively high socio-economic status. After all, in this context, this group faced no stereotype threat.

However, these writing assignments made a substantial difference for those who receive free- or reduced-price lunch (that is: students from low socio-economic status families.)

By one measure, they cut the achievement gap by 62%.

It sounds too good to be true, but…

By letting students write about their own values, teachers in this school helped students from low socio-economic status families feel more welcome in their classrooms.

As a result, they experienced stereotype threat less often.

And, as a result of that, students learned more.

Simply put: we can welcome our students by welcoming their values.

* In recent years, several non-replications have led scholars to doubt early research into stereotype threat. This is, in other words, a controversial research pool. I myself think the early research holds together well, and that — given the complexity of the process that leads to ST — non-replications aren’t wholly surprising. To be clear: some thoughtful and knowledgeable disagree with me.

In any case, this study (a non-non-replication) suggests that the theory might well have merit.

** In my experience, people often react very badly to that phrase. It seems to imply blame: “if only you bad people didn’t promote stereotypes,” some people hear, “then this problem would go away.”

However, Steele explicitly rejects that kind of blame. He defines the problem not so much in individuals as in the environment. Everyone knows the stereotype that X people are bad at Y, and so stereotype threat takes place even if none of the people in the room believe the stereotype.

To repeat: Steele isn’t blaming. He’s identifying the social contexts in which counter-productive thought process get started, and trying to fix them.

One Response to Welcoming Students by Welcoming Their Values

PREVIOUS
Sleep Is Essential. And, COMPLICATED.

NEXT
When Facing Dramatic Blog Headlines, Ask For Evide...