You read that right. I mean: it’s really good news about teens and sleep. 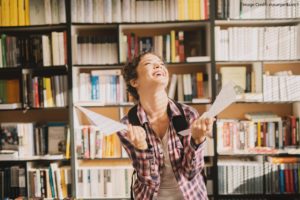 More sleep should benefit, say, their mental health, their physical health, and their academic performance.

Heck, they should just feel better.

If teens’ biology prompts them to stay awake later and wake up later (it does), then we could help adolescents sleep more by starting high school later.

Although obvious, that solution has two important flaws:

First: we haven’t tested its efficacy.

Second: teens might just stay up later, and thereby rob themselves of the extra sleep we’re trying to provide. We just don’t know. (See previous paragraph.)

The city of Seattle, Washington delayed high school start times from 7:50 am to 8:45 am. Researchers measured lots of student behaviors both before and after that change. What did they find?

First: students slept more. They got, on average, 34 minutes of extra sleep: from 6 hours 50 minutes to 7 hours and 24 minutes.

Second: they got higher grades. The average among measured students rose from 77.5% to 82%.

(The researchers hesitate to make strong causal claims; something else might account for the better grades. But, it’s a highly plausible hypothesis that extra sleep helped them learn more.)

Third: at one of the two high schools, first-period absences fell. (At the second, the absence rate remained constant.)

The researchers don’t make a strong argument about the reason for this difference. They do note, however, that the improving school has a higher percentage of economically disadvantaged students. Perhaps the combination of early start times and low SES made on-time arrival especially challenging.

In particular, it doesn’t rely on student self-reports — as so many sleep studies do. Instead, it asked students to wear a wrist monitor that tracked their activity levels.

Also, it took both pre- and post-change measurements. That is: they didn’t wait until after the change and then start measuring. Instead, they got a solid baseline, and then compared the after-effects to that baseline.

A final note: this article says that other school districts — and even states — are contemplating similar changes. Here’s hoping they follow through. And, here’s hoping that parents support these changes.

PREVIOUS
Everything You Wanted to Know About Sleep, in 20 M...

NEXT
Reader, Come Home: The Reading Brain in a Digital ...