Oscar Wilde famously said that he could resist everything but temptation.

This may be the only way that I’m a lot like Wilde. You, too, probably resemble this great Irish wit. 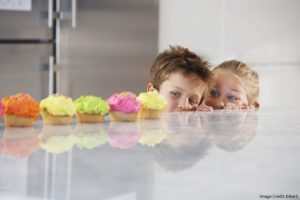 In front of me is a slice of chocolate cake. Or pizza. Or the very latest tech gizmo.

But I steel myself and, like Odysseus resisting the Sirens, I deny myself this treat. That’s self-control.

Much of the research into self-control resembles this scenario. Roy Baumeister, one of the best-known self-control researchers, often asked study participants to resist chocolate chip cookies.

If you can resist freshly-baked chocolate chip cookies…well…that’s self-control.

Clearly, if we want to helps our students with self-control, we should help them resist such temptations.

Maybe you, and me, and Oscar Wilde are all really bad at resisting temptation. Maybe that’s not how self-control works at all.

Instead, in one of the most interesting psychology studies I’ve read, several researchers come to a different conclusion.

Instead, they use their self-control to avoid temptation in the first place.

That’s right: effective self-control isn’t exactly self-control. Instead, people who score highest on measures of self-control use it to develop virtuous habits and avoid tempting situations.

The reason I’m good at, say, staying on my diet is NOT that I resist cupcakes.

Instead, I’m good at dieting because a) I have gotten in the habit of making a salad, and b) my lunchtime walk never approaches the pizza joint.

I never have to resist temptation, because I use self-control to avoid temptation in the first place.

Come to think of it: Odysseus didn’t use his self-control to resist the Sirens. He was, after all, tied to the mast at the time he sailed past them.

Instead, he used his self-control to prepare for temptation. Because he knew he couldn’t resist it, he made a plan to ensure the temptation wouldn’t lead him astray.

If we want our students to improve their executive functioning, if we want them to get better at self-control, then we should not focus on resisting temptation.

Instead, we should focus on avoiding temptation.

Resistance might be futile. But: the self-control paradox suggests we can bypass resistance altogether.

One Response to The Self-Control Paradox: Resistance is (Often) Futile

NEXT
Video: Stress and Memory