The Gardener and the Carpenter: What the New Science of Child Development Tells Us About the Relationship Between Parents and Children by Alison Gopnik 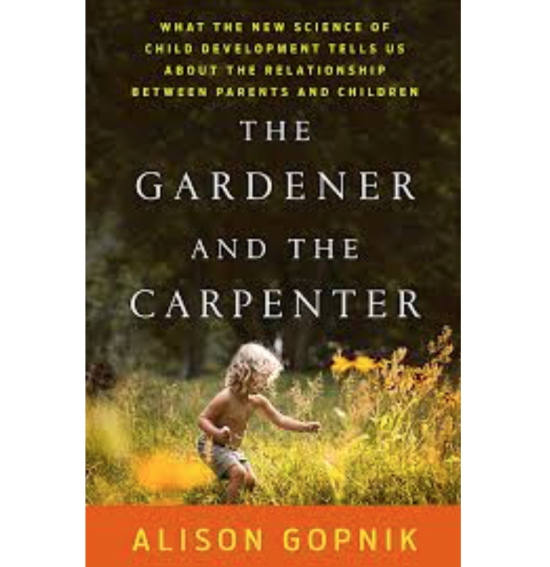 Parents—a noun, something an individual may be—have existed for as long as there have been children. The idea of “parenting” as a verb, something one does, is a new, odd, and problematic cultural change for parents and children alike. Alison Gopnik, a self-described “bubbe at Berkeley” or mother and grandmother, and University of California, Berkeley professor of psychology and philosophy, argues that parents can aspire to love their children better without thinking of their role as making their child into a certain kind of adult. Her most recent book, The Gardener and the Carpenter: What the New Science of Child Development Tells Us about the Relationship Between Parents and Children, references the idea that parents should act like a gardener, providing a rich and safe environment in which flowers (or people) can grow into the best version of themselves and thrive. Gopnik advises that Parents should not mold children into a particular and unchanging kind of being the way a carpenter molds furniture into its specific form. tThroughout the book Gopnik explores parenting paradoxes and the implications for how to support children. These paradoxes include the fact that children must transform from complete dependence to complete autonomy; children must transform from people who mostly play to people who mostly work; parents need both to pass on knowledge and traditions and to allow kids to innovate and differentiate; and parents’ love is specific to their individual children, which can conflict with the job of supporting positive development for a community’s children.

The verb of “parenting” only emerged towards the end of the 1950s and then spiked in popular usage in the 1970s. Rather than parenting, we need to let kids learn and grow by providing them a safe and protected period to do so. Tragically, even though the U.S. is the richest nation, we do not do a good job as a society of protecting children (e.g., 1 out of 5 kids lives in poverty, we do not have guaranteed paid leave for parents to care for kids).

Gopnik argues that an evolutionary perspective on the parent-child relationship can help us understand how to be parents today. We are unique among species in our long period of childhood, and across species longer average childhoods are associated with greater parental involvement, fewer children per mother, longer lives of offspring, higher survival rates of offspring, more intelligence, and larger brains. The tendency of our species to form long-term bonds with a co-parent, invest significantly in raising children, live long enough to become grandparents, and rely on other adults to assist with child care have all contributed to our longer childhoods.

Our longer childhoods provide a protected period of observation, learning, and play, which contributes to our ability to become flexible, innovative adults. Children learn from observing actions and intentions of other people, especially individuals similar to them, who have proven themselves to be good teachers, and who convey confidence. Apprenticeships, in which students see skills modeled and in which their learning process and production of products are entwined, is an effective way to learn. Children learn from what adults say and from answers to the questions children ask adults. Play helps kids engage in counterfactual thinking, develop theory of mind, and develop cognitive flexibility, but kids must feel safe to engage in play. We do not need to formally instruct in order to support young children in learning; rather, we should involve them in the activities of our daily lives and make them feel secure. Gopnik argues that wealthy children often have overly scheduled and controlled environments, while poor children often have chaotic lives in which they are neglected. Few children have the ideal environment that feels both safe and free.

Very young children show tremendous versatility in their learning and plasticity in their brain. By about school age kids become a bit less flexible but more efficient, both in how they learn and in how their brain is connected within itself. Adolescence brings a reemergence of neural plasticity and a desire to innovate. During this period of innovation, parents serve as a bridge to the past as they watch their teens enter into the future.

Parents who are turned off by the pressure to prepare kids for the Ivy League before they have started Little League, educators who are concerned by a school culture or the broader culture of overly involved parenting, policy makers interested in creating scientifically informed policies to support the next generation’s development, and anyone interested in how the relationship between parents and children make us uniquely human will find Gopnik’s book informative and compelling.

Gopnik, A. (2016). The Gardener and the Carpenter: What the New Science of Child Development Tells Us About the Relationship Between Parents and Children. New York, NY: Farrar, Straus and Giroux. Macmillan.

PREVIOUS
The 2017 Transforming Education Through Neuroscien...

NEXT
Correlation Isn’t Causation, Is It?