“The” Effect of “Exercise” on “the Brain”

A month ago, I wrote about a Twitter feud focusing on exercise during learning. 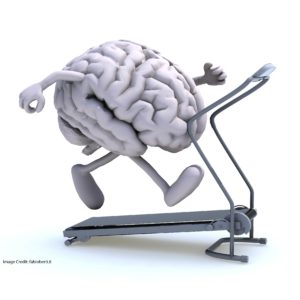 When a PE teacher posted a video of his students reading on exer-cycles, edu-Twitter irrupted with champions (“love it!”) and critics (“bonkers!”).

My response at the time was:

First: I rather suspect that exercise during learning will distract students from their reading; however,

Second: we don’t have research on this specific question; and

Third: in the absence of research, it’s probably good for PE teachers to be experimenting in this realm.

In other words: Edu-Twitter, relax.

Since that mini-controversy, I’ve stumbled across an intriguing research addendum.

Researchers in Germany wanted to know: how does exercise affect the brain. More specifically, does a difference in intensity level matter?

To answer that question, they had had about 2 dozen men exercise at those different levels on different days.

The specific results quickly turn into a tornado of acronyms. But, briefly summarized, the researchers found that:

And surprisingly (to me), high intensity exercise also diminished connectivity in networks that process motor coordination.

In other words, “exercise” does not have “an” effect on “the brain.”

Instead, different kinds of exercise have distinct effects on particular brain regions and networks.

Second: that “short term” caveat is important. Notice for instance that high intensity exercise muddles motor coordination networks. Why would that be? The study’s authors suggest it indicates temporary “motor fatigue.”

So, too, we might be tempted to enhance cognitive function with low-intensity exercise. But, just as the motor-fatigue effect was temporary, so too the cognitive-function effect might be temporary.

Third: back to those readers on bicycles. I don’t think this research applies directly to that classroom experiment. (Although, if low-intensity exercise really improves cognitive function — even temporarily — that finding makes those bikes somewhat more appealing. That is: low-intensity exer-cycling might improve the students’ cognition and focus while they read.)

Instead, I think it highlights the importance of patience and specificity. Until we have more research on this specific point, I don’t think we have nearly enough reason to cry either “bravo!” or “bonkers!”

Instead, let’s gather more data. And, in the meanwhile, we can encourage one another in reasonable classroom experiments.

And yes, I do mean even PE class experiments including exer-cycles.

NEXT
Sharing the Learning and the Brain Experience with...