The Best Book on Cognitive Load Theory: Ollie Lovell to the Rescue

Teaching ought to be easy.

After all, we have a functionally infinite amount of long-term memory. You don’t have to forget one thing to learn another thing — really.

So: I should be able to shovel information and skills into your infinite long-term memory. Voila! You’d know everything

Alas, to get to your long-term memory, “information and skills” have to pass through your working memory. This very narrow bottleneck makes learning terribly difficult — as teachers and students well know.

If only someone would come up with a theory to explain this bottleneck. If only that theory would help teachers and students succeed despite its narrow confines.

Good News, with a Twist

Happily, that theory exists. It’s called “cognitive load theory,” and several scholars in Australia (led by John Sweller) have been developing it for a few decades now.

It explains the relationship between infinite long-term memory and limited working memory. It explores practical classroom strategies to solve the problems created by this relationship.

Heck, it even muses upon evolutionary explanations for some quirky exceptions to its rules.

In other words, it has almost everything a teacher could want.

Alas — [warning: controversial opinion] — it does include one glaring difficulty.

However, it relies on on a long list of terms, each of which describes complex — sometimes counter-intuitive — concepts.

If you start reading articles based on cognitive load theory, you might well discover that …

… a particular teaching practice works this way because of the “split attention effect” (which doesn’t mean exactly what it sounds like),

… but it works that way because of the “expertise reversal effect,”

As a result, teachers would really benefit from a book that explains cognitive load theory so clearly as not to overwhelm our working memory.

Could such a book exist?

Ollie Lovell To The Rescue 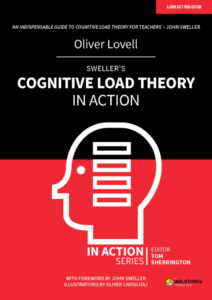 Lovell’s book does exactly what teachers want it to do: explain cognitive load theory without overloading our cognitive faculties.

First, he has an impressive ability to explain cognitive load theory concepts with bracing clarity.

For instance, let’s go back to that “expertise reversal effect.” Why might a teaching strategy benefit a novice but not an expert?

Because he writes and explains so clearly, Lovell helps teachers understand all that cognitive load theory terminology without feeling overwhelmed.

SO MANY CLASSROOM EXAMPLES.

Whatever grade you teach, whatever topic you teach, you’ll find your discipline, your grade, and your interests represented. (I believe Lovell is a math teacher; as a high-school English teacher, I never felt slighted or ignored.)

Practicing What He Preaches

Students of cognitive load theory will notice that he more-or-less skips over “germane” cognitive load: a category that has (ironically) created all sorts of “extraneous” working memory load for people trying to understand the theory.

He describes the difference between biologically primary and biologically secondary learning. And he explains the potential benefits this theory offers school folk.

However, Lovell doesn’t get bogged down in this niche-y (but fascinating) topic. He gives it just enough room, but not more.

Heck, he even keeps footnotes to a minimum, so as not to split the reader’s attention. Now that’s dedication to reducing working memory load!

No doubt your pile of “must read” books is intimidatingly large.

If you want to know how to manage working memory load (and why doing so matters), Lovell’s Cognitive Load Theory in Action should be on top of that pile.

I suspect Lovell’s explanations are so clear because he has lots of experience explaining.